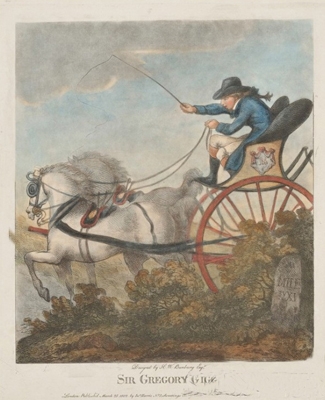 A young man driving (right to left) one of the new high two-wheeled gigs. Its small body is poised high on springs above the large wheels; the driver leans forward to whip his pair of high-stepping horses, which are about to descend a precipitous hill. He wears the plain high-crowned hat which was so great a novelty in 1781 and top-boots. On the panel of the gig is a draped escutcheon with monogram or cipher. In the foreground are bushes and rough ground with a milestone, "Miles XXI". 23 July 1782. Inscription Language: Inscription Content: Lettered with title and "Designd by H.W.Bunbury Esqr.. / London, Publish''d July 23d 1782 by J R Smith, No. 83 Oxford Street, London" Etching and mezzotint. The stairical print refers to Sir Gregory Page-Turner 3rd Baronet 1748 ? 4 January 1805 who inherited a substantial fortune and was know to be a man of fashion who frequented the Vauxhall gardens he was a wealthy landowner and politician in late 18th century England, serving as Member of Parliament (MP) for Thirsk for 21 years.. ''Sir Gregory Gigg, was also satirised on the satge or the City Beau'' is the title of a song in O''Keefe''s Son in Law, played at the Haymarket 1779, the songs only being printed.