shepherdess with her flock 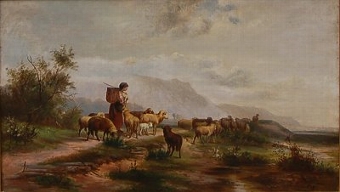 Christian MaliChristian Friedrich Mali (* 6 October 1832 in Broikhuizen , Holland; ? 1 October 1906 in Munich ) was a painter and a professor in Munich.

He came with his parents to Wuerttemberg, was until 1858 as Xylograph in Stuttgart . He moved to Munich , where he started landscape painting, he travelled to Italy where he started to investigate architecture painting.. At that time the evening in Verona ( new Pinakothek, Munich), portion from Venice and the monastery Maulbronn developed 1865 he went to Duesseldorf and from there to of Paris , where the study of the works Troyons and its influence moved him, and in particular animal painting , of which sheep and shepherding was his most important subject.