sheep in a wooded landcape with a cottage beyond 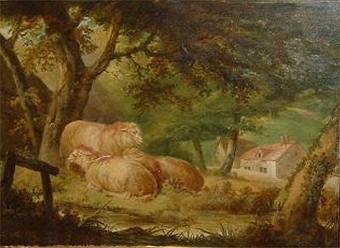 Morland was born in London on the June 26th, 1763. His mother was a Frenchwoman, who possessed a small independent property of her own. His grandfather, George H. Morland, was a subject painter. Henry Robert Morland (c. 1719 ? 1797), father of George, was also an artist and engraver, and picture restorer, at one time a rich man, but later in reduced circumstances. His pictures of Jaundry-maids, reproduced in mezzotint and representing ladies of some importance, were very popular in their time.

At a very early age Morland produced sketches of remarkable promise, exhibiting some at the Royal Academy in 1773, when he was but ten years old, and continuing to exhibit at the Free Society of Artists in 1775 and 1776, and at the Society of Artists in 1777, and then sending again to the Royal Academy in 1778, 1779 and 1780. His very earliest work, however, was produced even before that tender age, as his father kept a drawing which the boy had executed when he was but four years old, representing a coach and horses and two footmen. He was a student at the Royal Academy in early youth, but only for a very short time. From the age of fourteen he was apprenticed to his father for seven years, and by means of his talent appears to have kept the family together. He had opportunities at this time of seeing some of the greatest artists of the day, and works by old masters, but even then a strange repugnance for educated society showed itself, and no persuasion, for example, could ever allure him within reach of the Angerstein gallery, where he would have been a welcome visitor. Before his apprenticeship came to an end, George Romney offered to take Morland into his studio for three years, with a salary of 300 a year, but the offer was rejected, and as soon as his freedom came, he left his dull, respectable home, with its over-strict discipline, and began a career of reckless prodigality which has hardly a parallel in art biography. In 1785 he was in France, whither his fame had preceded him, and where he had no lack of commissions, and in the following year he married Anne, the sister of William Ward, the engraver, and settled down in High Street, Marylebone.Morland''s wife was a beautiful and virtuous woman, and throughout the whole of her husbands profligate career was deeply attached to him. It was at this time that he painted the six pictures known as the Laetitia series, and, just preceding his marriage, four other didactic works, The Idle and the Industrious Mechanic and The Idle Laundress and the Industrious Cottager. Shortly after his marriage Morland resided at Pleasant Passage, Hampstead Road, and at that time his reputation was rapidly increasing, while as he was the sole vendor of his own productions, his expenditure, although very extravagant, was not beyond his income. Soon, however, he moved to Warren Place, and there, although he was making thousand pounds a year by his pictures, he lived at such an expensive rate that he began the series of financial difficulties which finally ruined him. His wild frolics about town, and the prodigal line of conduct upon which he had entered, resulted in a heavy accumulation of debt, but in 1789 he set himself to clear off his encumbrances, and did so in fifteen months. He then removed to Leicester Square, later to Tavistock Row, then to St Martin''s Lane, and finally to Paddington, and was at that time at the very height of his reputation.
The Labourer''s Luncheon, 1792.After moving to a larger house in Winchester Row, his financial position became so embarrassed that he had to fly from his creditors into Leicestershire, where he indulged to the full his delight in animal life. After a year, however, he returned to London and settled in Charlotte Street, when his difficulties increased, and time after time he had to obtain letters of licence, in order to avoid being arrested by his creditors. At last, however, he had to cross the water, and change his place of abode from time to time, keeping it as secret as possible, and we hear of him at Lambeth, at East Sheen, in the Minories, Kentish Town, Soho, Newington, Kennington Green and Hackney, while he had numerous adventures in eluding the attention of those who desired to capture him.In 1799 he escaped to the Isle of Wight, and settled down for some time at Yarmouth, but returned to London at the end of the year, was arrested and sent to Kings Bench prison, where he lived within the rules, occupying a small furnished house in St George''s Fields, but keeping his exact residence a secret. In 1802 he was liberated, but in 1803 had to place himself in the custody of the Marshalsea, in order to avoid his creditors. Afterwards he visited Brighton and other places, and by his riotous living brought himself to such a state of health that fits of an apoplectic nature became frequent, and he was for a time paralyzed. On October I9th, 1804, he was arrested by a publican and conveyed to a sponging-house, where, in attempting to make a drawing which could be sold in discharge of the debt, he was seized with a fit which proved the beginning of brain fever. He died on October 29th, 1804. His wife survived him only three days, the news of his death bringing on convulsive fits from which she died on November 2nd. Their remains were interred together in the burying-place of St James''s Chapel.[edit]
Work

Dogs In Landscape - Setters & Pointer, 1792.The finest of Morland''s pictures were executed between 1790 and 1794, and amongst them his picture of the inside of a stable, in Tate Britain, London, may be reckoned as a masterpiece. His works deal with scenes in rustic and homely life, depicted with purity and simplicity, and show much direct and instinctive feeling for nature. His coloring is mellow, rich in tone, and vibrant in quality, but, with all their charm, his works reveal often signs of the haste with which they were painted and the carelessness with which they were drawn. He had a supreme power of observation and great executive skill, and he was able to select the vital constituents of a scene and depict even the least interesting of subjects with artistic grace and brilliant representation. His pictures are never crowded; the figures in them remarkably well composed, often so cleverly grouped as to conceal any inaccuracies of drawing, and to produce the effect of a very successful composition. As a painter of English scenes he takes the very highest position, and his work is marked by a spirit and a dash, always combined with broad, harmonious coloring. He exhibited regularly at the Royal Academy from 1784 down to 1804, but few of his academy pictures can be identified owing to the inadequate description of them afforded by their titles.