salmon and a creel, on a grassy bank 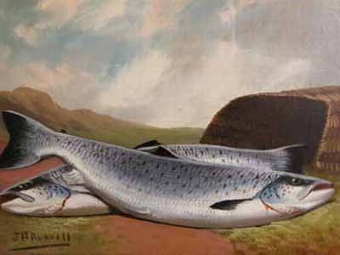 In the nineteenth century, taxidermy and plaster casts were the accepted methods used to preserve trophy fish. It is believed that, John Bucknell Russell, may have started the tradition of trophy fish carving around 1875-80. Born and raised in Edinburgh, Scotland, and a self-taught artist, he established a studio in Fochabers, a village near the mouth of the River Spey. Russell''s carvings reflect a late nineteenth century trompe l''oeil style, where the head and pectoral fins were painted on instead of carved to create realistic "eye-fooling" carvings.