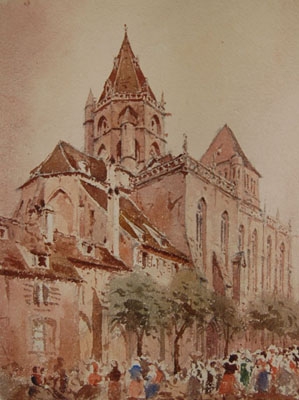 inscribed and dated on the reverse " S. Thomas - Strasburg / Oct 12 - 1855 "
The Saint-Thomas Church is the main Protestant church of Strasbourg since Strasbourg''s Cathedral became Catholic again after the annexation of the town by France in 1681. It is nicknamed the "Protestant Cathedral" (la cath?drale du Protestantisme alsacien, Kathedrale der Protestanten) or the Old Lady (Die alte Dame) , and the only example of a hall church in the Alsace region. The building is located on the Route Romane d''Alsace. The site on which the current church stands was used as a place of worship under the patronage of Thomas the Apostle as early as the sixth century. In the ninth century, Bishop Adelochus established a magnificent church with adjoining school, however both burned down in 1007, and again in 1144. In 1196, construction began on the fa?ade of a new, fortress-like building with an imposing steeple, built in the Roman style. Interrupted several times, the building work was completed in 1521, in the style of the late Gothic. In 1524, the church was assigned to the Lutheran faith (Martin Bucer served there as a Pastor ), a status which it maintained despite annexation of Alsace to the Catholic France. It still administers the primary and secondary schools ?cole Saint-Thomas and Foyer Jean Sturm, as well as the S?minaire Protestant, a seminary located in the adjacent Baroque building. The Saint Thomas church played a crucial part in the liturgical revival as the place where, from 1888, Friedrich Spitta tested new forms of church service, and where the Akademische Kirchenchor (English: Academic Chorus) was brought into being. Julius Smend came to preach regularly from 1893, and between 1894 and 1899, the Gesangbuch f?r Elsa?-Lothringen (English: Hymn Book for Alsace-Lorraine) was developed there.