portrait study of a young girl 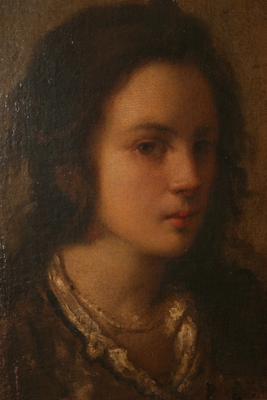 Unsigned, identified on a canceled label from Fogg Art Museum, Harvard University, affixed to the reverse, indistinctly inscribed on a label, possibly period, also fixed to the reverse.
Oil on canvas, 17 x 11 1/5 in. (43.2 x 29.2 cm), framed.
Losses (predominately at edges), retouch, scattered craquelure with lifting, surface grime.
Francesco Furini (c. 1600 (or 1603) ? August 19, 1646) was an Italian Baroque painter of Florence.
His early training was by Matteo Rosselli (whose other pupils include Lorenzo Lippi and Baldassare Franceschini), though Furini is also described as influenced by Domenico Passignano and Giovanni Biliverti (Cantelli 1972). He befriended Giovanni da San Giovanni. Traveling to Rome in 1619, he also would have been exposed to the influence of Caravaggio and his followers. Among his pupils are Simone Pignoni (1611-98) and Giovanni Battista Galestruzzi. At the age of forty, he became a priest for the parish of Sant''Ansano in Mugello.
Furini''s work reflects the tension faced by the conservative, mannerist style of Florence when confronting then novel Baroque styles. He is a painter of biblical and mythological set-pieces with a strong use of the misty sfumato technique. In the 1630s, when he became a priest, his style paralleled that of Guido Reni.
Freedberg describes Furini''s style as filled with "morbid sensuality". His frequent use of disrobed females is discordant with his excessive religious sentimentality, and his polished stylization and poses are at odds with his aim of expressing highly emotional states. His stylistic choices did not go unnoticed by more puritanical contemporary biographers like Baldinucci. Pignoni also mirrored this style in his works.
One of his masterpieces, and not reflective of the style of his canvases, is the airy fresco in Palazzo Pitti, where on order of Ferdinando II de Medici, between 1639-1642, Furini frescoed two large lunettes depicting the Platonic Academy of Careggi and the Allegory of the Death of Lorenzo the Magnificent. The frescoes can be seen as a response to Pietro da Cortona, who was at work in the palazzo during these years (Cantelli 1972).
In Robert Browning''s series of poems titled Parleyings with certain people of importance in their day, the poet envisions an explanation by Furini that refutes the published assertion by Filippo Baldinucci that (on his deathbed) he had ordered all his nude paintings be destroyed. For Browning, Furini''s disrobement of his subjects is emblematic of a courageous search for the hidden truth. Modern research has demonstrated that Furini did not abandon his sensual painting subjects on entering the priesthood.
Furini was rediscovered in the early twentieth century by Arturo Stanghellini. His scantily documented career was sketched by Elena Toesca (Furini, 1950) and brought into focus with an exhibition of his drawings at the Uffizi, 1972.