Antique Portrait of a young lady by Thomas Hudson | ANTIQUES.CO.UK |

portrait of a young lady by thomas hudson 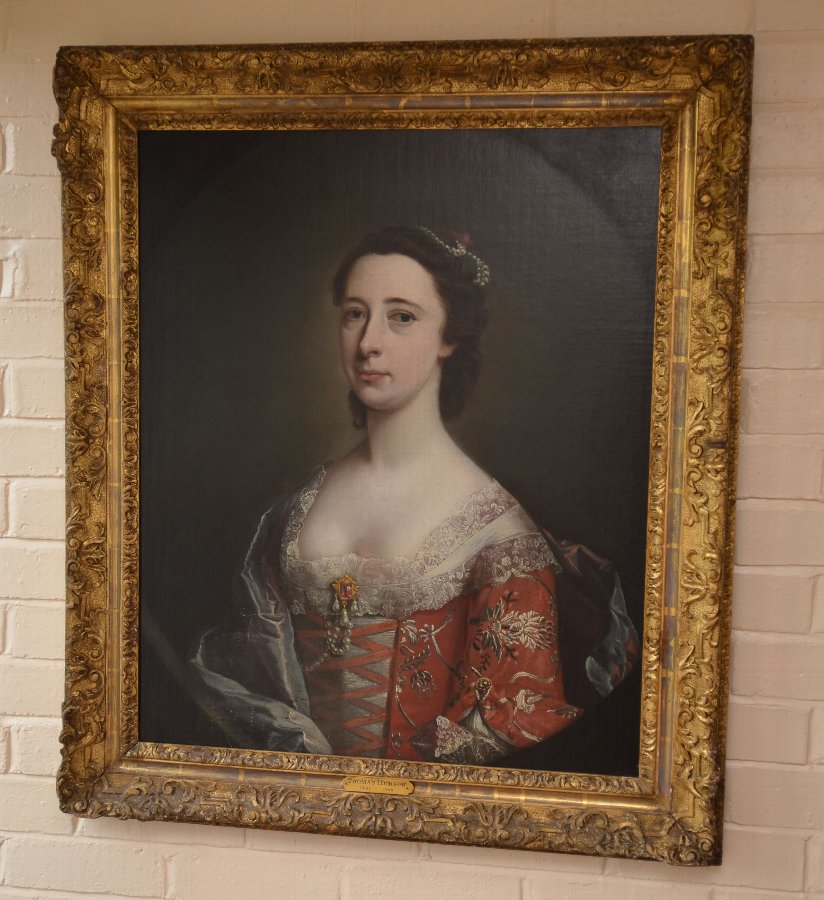 Moseley antiques has 0 antiques for sale.
click here to see them all

37” high including the frame

Thomas Hudson was born in Devon in 1701 and he studied under the portrait painter Jonathan Richardson, whose daughter he ran away with and married in 1725.
Hudson was one of the foremost portrait painters in England in the mid 18th Century, who practiced in the West Country as well as London from 1730 - 1740. He was influenced by Van Loo, whom he succeeded as principal, the portrait painter for British Society. By 1744 he had established himself as the leading portraitist in London attracting eminent sitters.
Hudson painted at least 400 portraits, about 80 of which were engraved. Hudson and Ramsay both employed Joseph & Alexander Van Aken to paint their draperies. The practice of employing painters in the mid 18th Century was very common. The Van Aken brothers were the best skilled painters of silks, satins, velvets and embroideries and their contribution was considered to be an enhancement to the final painting.
Hudson had many pupils including Joseph Wright of Derby, John Hamilton Mortimer and Joshua Reynolds, indeed his influence and importance to 18th Century painting in Britain is immense.
He exhibited his work at The Society of Artists of Great Britain, and at The Free Society of Artists.
Hudson was a member of the group of artists including Hogarth, Allan Ramsay, Francis Hayman and the sculpture John Michael Rysbrack who met at Old Slaughter’s Coffee House in the mid-1740’s and who promoted Thomas Coram’s Foundling Hospital, of which they were Governors, as the first public exhibiting space for artists in London.
Hudson visited France and the Low Countries in 1748 and was accompanied by Hogarth, Hayman and others. He briefly visited Italy in 1752 with Roubiliac.
Because of his tremendous success he kept a large studio with many assistants. Many works of poorer quality are attributed to him but his true work proves the breadth of his talent.
Later in life he married again, a Mrs Fiennes, a widow with a good fortune.Thomas Hudson died in Twickenham on 26 January 1779.Works Represented: National Portrait Gallery; National Gallery of Ireland; Tate; Bodleian Library; Dulwich Art Gallery; Goldsmiths Company; Blenheim Place; Yale.Bibl: Portrait Painters in Britain – B. Stewart & M. Cutten
Thomas Hudson Exhibition Catalogue; The Iveagh Bequest Kenwood 1979

Moseley Antiques, an online and personal antiques broker, we want our customers to be completely satisfied, viewing in person, on request 6 days a week, we pride ourselves with the very best customer service. We are happy to organise both personal in house deliveries or using quality couriers to all worldwide destinations, our antiques have arrived safely as far away as New Zealand. Payment can be made by any of the following: Paypal, Cheque and Bank Transfer. Please do not hesitate to contact us if you have any queries or questions, by email moseleyantiques@live.com or call 07548804848, Thank you.

Moseley antiques has 0 antiques for sale.
click here to see them all