Antique Portrait of a young girl wearing a straw hat tied with a pink scarf | ANTIQUES.CO.UK | 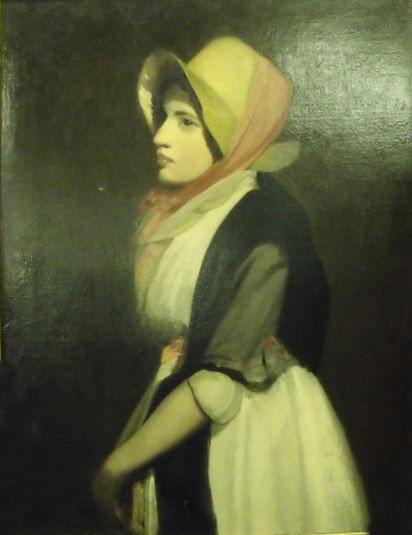 Opie was born at Trevellas, St Agnes near Truro in Cornwall, the son, and youngest child of four, of Edward Opie, a master carpenter, and Mary (n?e Tonkin). He showed a precocious talent for drawing and mathematics; by the age of twelve he had mastered Euclid and opened an evening school for poor children where he taught reading, writing and arithmetic. His father, however, did not encourage John''s abilities, and instead apprenticed him to his own trade of carpentry. Opie''s first recorded sketch was made at the age of ten and his work eventually came to the attention of local physician and satirist, Dr John Wolcot (Peter Pindar), who visited the teenage artist at his place of work - a sawmill - in 1775. Recognising a great talent, Wolcot became Opie''s mentor, buying him out of his apprenticeship and insisting that he come to live at his home in Truro. Wolcot provided invaluable encouragement, advice, tuition and practical help in the advancement of Opie''s early career, including obtaining many commissions for work. In 1780, Opie travelled with Wolcot to London, where they shared a residence together, having entered into a formal profit-sharing agreement; Wolcot introduced the "Cornish wonder" to other artists, including the great Sir Joshua Reynolds, who went on to compare him to Caravaggio and Velazquez, and to prospective patrons. This business arrangement with Wolcot lasted for a year, after which Opie informed the doctor that he now wished to go it alone, leading to the estrangement of the two former partners.

Opie was introduced, prior to March 1782, at the court of King George III, who purchased one of his pictures and commissioned him to produce a portrait of Mary Delaney. He also received commissions to paint the Duke and Duchess of Gloucester, Lady Salisbury, Lady Charlotte Talbot, Lady Harcourt and other ladies of the court. Opie''s residence at "Orange Court", Castle Street, Leicester Fields, was said to be "crowded with rank and fashion every day" and he was the talk of the town. Winter''s Tale, Act II, scene III, (engraving after Opie for the Boydell Shakespeare Gallery). In 1782 he first exhibited at the Royal Academy and in December of that year was married to Mary Bunn - though the match proved to be an unhappy one and they were eventually divorced in 1796 after her elopement. Following a sharp decline in his popularity, Opie began to work on improving his technique, meriting the praise of his rival James Northcote: "Other artists paint to live; Opie lives to paint." At the same time he sought to supplement his early education by the study of Latin, French and English literature, and to polish his provincial manners by mixing in cultivated and learned circles.In 1786 he exhibited his first important historical subject, the Assassination of James I, and in the following year the Murder of Rizzio, a work whose merit was recognized by his immediate election as associate of the Royal Academy, of which he became a full member in 1788. He was employed on five subjects for John Boydell''s Shakespeare Gallery; and until his death, his practice alternated between portraiture and historical work. He married Amelia Alderson in May 1798 (see Amelia Opie) and they lived at 8 Berners Street, where Opie had moved in 1791.Opie painted many notable men and women of the day including Mary Wollstonecraft, Samuel Johnson, Francesco Bartolozzi, John Bannister, Joseph Munden, Charles James Fox, William Betty, Edmund Burke, John Crome, James Northcote, Henry Fuseli, Thomas Girtin, Robert Southey, Samuel Parr, Elizabeth Inchbald and Mary Shelley; 508 portraits in all, most in oil, and 252 other pictures.In 1805, Opie was elected a Professor at the Royal Academy and from May 1807 gave a series of 4 lectures which were later published as a book after his death, with a memoir by his widow Amelia Opie, in 1809. His students there included Henry Thomson. Opie was also known as a writer on art by his Life of Reynolds in Wolcot''s edition of Matthew Pilkington''s "A Dictionary of Painters" and his Letter on the Cultivation of the Fine Arts in England, in which he advocated the formation of a national gallery, Opie died in April 1807, aged 46, at his home in Berners Street, and was buried at St Paul''s Cathedral, in the crypt next to Joshua Reynolds, as he had wished. He had no children.