Antique Portrait of a young girl holding her doll | ANTIQUES.CO.UK |

portrait of a young girl holding her doll 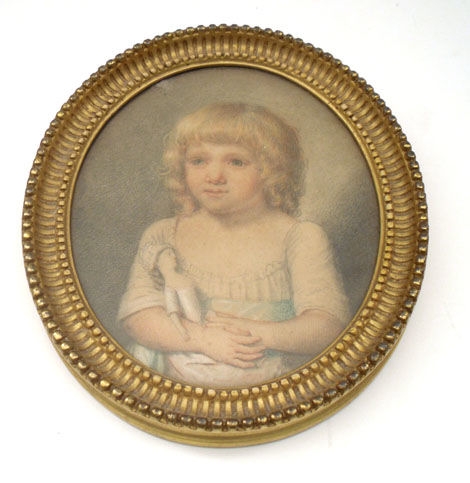 Born in Tiverton, Devon, the son of a schoolmaster, he was initially educated at Blundell''s School but allowed to travel to London aged just 12 to take lessons in learning. He won a prize from the Society of Artists in 1754 and by 1760 had established his own business. He exhibited his first works aged just 20 in 1762 and was soon in demand. Such was his success, that still not 30, Cosway was elected one of the founder members of the Royal Academy (he is included in a group portrait of the 1768 founders, though some accounts suggest he was appointed an Academician three years later, in 1771. He painted the future King George IV in 1780 and was appointed Painter to the Prince of Wales[1] in 1785?the only time this title was ever awarded. His subjects included the Prince''s first wife, Maria Anne Fitzherbert, and various English and French aristocrats, including Madame du Barry, mistress of King Louis XV of France. Cosway''s pupils included Andrew Plimer (1763?1837).
From 1995 to 1996, the National Portrait Gallery in London held an exhibition entitled Richard and Maria Cosway: Regency Artists of Taste and Fashion, with 250 works on display. On 18 January 1781, Cosway married the Anglo-Italian artist Maria Hadfield. Maria was a composer, musician and authority on girls'' education and was much admired by Thomas Jefferson, who wrote letters to her decrying her marriage to another man and kept an engraving made from one of Cosway''s paintings of Maria at Monticello. The Cosways'' marriage is thought to be an arranged marriage and later a marriage of convenience due to his being 20 years her senior. Richard was "well known as a libertine and commonly described as resembling a monkey." The film Jefferson in Paris depicts Maria Cosway''s romance with Thomas Jefferson and also depicts Richard Cosway as effeminate, something which is not certain historically. Richard realized his wife''s talent and helped her to develop it.In 1784, the Cosways moved into Schomberg House, Pall Mall, which became a fashionable salon for London society.[1] In 1791 they moved to a larger house in Stratford Place. However, the marriage did not last, eventually being annulled. In later life, Cosway also suffered from mental disorders and spent some time in various institutions. He died in London in 1821 and was buried at Marylebone New Church. Sir John Soane bought more than 30 objects put up for sale at auction after Cosway''s death