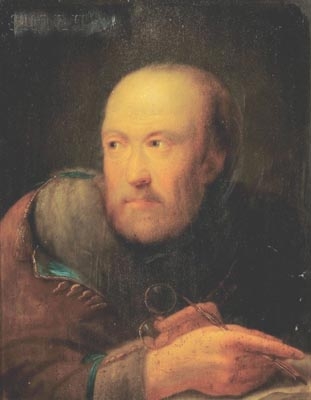 V?clav Hollar (Czech pronunciation:, known in England as Wenceslaus or Wenceslas and in Germany as Wenzel Hollar (13 July 1607 ? 25 March 1677), was aBohemian etcher, who lived in England for much of his life. He was born in Prague, and died in London, being buried at St Margaret''s Church, Westminster.

After his family was ruined by the Sack of Praguein the Thirty Years'' War, the young Hollar, who had been destined for the law, determined to become an artist. The earliest of his works that have come down to us are dated 1625 and 1626; they are small plates, and one of them is a copy of a "Virgin and Child" by D?rer, whose influence upon Hollar''s work was always great. In 1627 he moved to the region around Stuttgart; before moving to Stra?burg, and then, in 1633, to Cologne. It was in 1636 that he attracted the notice of the famous nobleman and art collector Thomas, earl of Arundel, then on an embassy to the imperial court. Employed as a draftsman he travelled with Arundel to Vienna and Prague, and finally in 1637 returned with him to England where he was to remain for many years. Though he lived in the household of Lord Arundel, he seems not to have worked exclusively for him, but to have begun selling works to publishers, which was afterwards his primary means of distribution. During his first year in England he created "View of Greenwich," later issued by Peter Stent, the print-seller. Nearly 3 feet (0.9 m) long, he received thirty shillingsfor the plate, a small fraction of its present value. Afterwards he fixed the price of his work at fourpence an hour, and measured his time by a sand-glass. Lord Arundel left England in 1642, and Hollar passed into the service of the Duke of York, taking with him a wife and two children. He continued to produce works prolifically throughout the English Civil War, but it adversely affected his income. Like some other refugees from London he was a guest of Marques of Winchester during the siege of Basing House and produced several engravings while there including one of the Marques. During the period of the unrest of the Civil Wars he worked in Antwerp, where he produced many of his most renowned works, including views, his "muffs" and "shells". In 1652 he returned to London, and lived for a time with Faithorne the engraver near Temple Bar.During the following years many books were published which he illustrated: Ogilby''s Virgil and Homer,Stapylton''s Juvenal, and Dugdale''s Warwickshire, St Paul''s and Monasticon (part i.). His income fell as book-sellers continued to decline his work, and the Court did not purchase his works following The Restoration. During this time he lost his young son, also reputed to have artistic ability, to theBlack Death. After the Great Fire of London he produced some of his famous "Views of London"; and it may have been the success of these plates which induced the king to send him, in 1668, to Tangier, to draw the town and forts. During his return to England a desperate and successful engagement was fought by his ship, the Mary Rose, under Captain John Kempthorne, against seven Algerine men-of-war,--a battle which Hollar etched for Ogilby''s Africa. He lived eight years after his return, still working for the booksellers, and continuing to produce well-regarded works until his death, for example a large plate of Edinburgh dated 1670. He died in extreme poverty, his last recorded words being a request to the bailiffs that they would not carry away the bed on which he was dying.

Hollar produced a variety of works; his plates number some 2740, and include views, portraits, ships, religious subjects, heraldic subjects, landscapes, and still life in many different forms. His architectural drawings, such as those of Antwerp and Strassburg cathedrals, and his views of towns, are to scale, but are intended as pictures as well. He reproduced decorative works of other artists, as in the famous chalice after Mantegna''s drawing. Almost complete collections of Hollar''s work are kept in the British Museum, the print roomat Windsor Castle and the National Gallery in Prague. Hollar''s oeuvre was first catalogued in 1745 (2nd ed. 1759) by George Vertue. The prints were subsequently catalogued in 1853 by Gustav Parthey and in 1982 by Richard Pennington. A new complete illustrated catalogue has been published in the New Hollstein German series. Much of his work is available online from the University of Toronto in their Wenceslaus Hollar digital collection.