Antique Portrait of a Nobleman in armour wearing the order of the golden fleece | ANTIQUES.CO.UK | 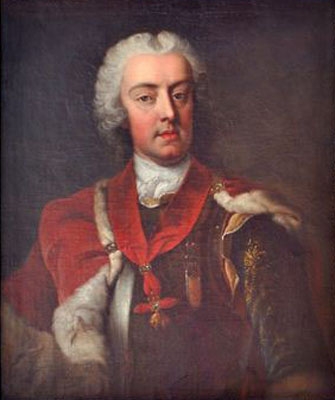 George Desmares was born in Sweden and died in Muncih Germany.
The Order of the Golden Fleece was modeled on the English Order of the Garter, but dedicated to Saint Andrew. Philip had been elected to membership of the Garter in 1422, but had declined to avoid offending the king of France. Like the Garter it was restricted to a limited number of knights, initially 24 but increased to 30 in 1433 and 50 in 1516?plus the sovereign. It received further privileges unusual to any order of knighthood: the sovereign undertook to consult the order before going to war; all disputes between the knights were to be settled by the order; at each chapter the deeds of each knight were held in review, and punishments and admonitions were dealt out to offenders, and to this the sovereign was expressly subject; the knights could claim as of right to be tried by their fellows on charges of rebellion, heresy and treason, and Charles V conferred on the order exclusive jurisdiction over all crimes committed by the knights; the arrest of the offender had to be by warrant signed by at least six knights, and during the process of charge and trial he remained not in prison but in the gentle custody of his fellow knights. The order was explicitly denied to "heretics", and so became an exclusively Catholic award during the Reformation, though the choice of the pagan Golden Fleece of Colchis as the symbol of a Christian order caused some controversy.
The badge of the Order, in the form of a sheepskin, was suspended from a jewelled collar of firesteels in the shape of the letter B, for Burgundy, linked by flints; with the motto "Pretium Laborum Non Vile" ("Not a bad reward for labour") engraved on the front of the central link, and Philip''s motto "Non Aliud" ("I will have no other") on the back (non-royal knights of the Golden Fleece were forbidden to belong to any other order of knighthood).
With the absorption of the Burgundian lands into the Habsburg empire, the sovereignty of the Order passed to the Habsburg kings of Spain, where it remained until the death of the last of the Spanish Habsburgs, Charles II, in 1700. He was succeeded as king by Philip of Anjou, a Bourbon. There followed a dispute between the Houses of Habsburg and Bourbon over the Golden Fleece, which resulted in the division of the Order into Spanish and Austrian branches. In either case the sovereign, as Duke of Burgundy, writes the letter of appointment in French.