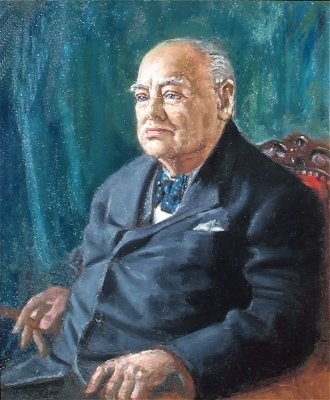 Sir Winston Churchill was the eldest son of the aristocrat Lord Randolph Churchill, born on 30th November 1874. He is best known for his stubborness yet courageous leadership as Prime Minister for Great Britain when he led the British people from the brink of defeat during World War II.

Following his graduation from the Royal Military College in Sandhurst he was commissioned in the Forth Hussars in February 1895. As a war correspondent he was captured during the Boer War. After his escape he became a National Hero. Ten month later he was elected as a member of the Conservative Party. In 1904 he joined the Liberal Party where he became the president of the Board of Trade.It was in 1910 he became Home Secretary where he worked with David Lloyd George. In 1911 he left the Home Office and became first Lord of the Admiralty. His career was almost destroyed as a result of the unsuccessful Gallipoli campaign during the First World War. He was forced to resign from the Admiralty. However, he returned to Government as the Minister of Munition in 1917. In this year he joined the coalition party in which he was a member until it collapsed in 1922 when for two years he was out of Parliament. He returned to the conservative government in 1924 and was given the job of Chancellor of the Exchequer. For ten years during the depression Churchill was denied cabinet office. His backing and support for King Edward VIII during his abdication were frowned upon by the national government. However in September 1939, when Nazi Germany declared war on Poland, the public supported him in his views. Once again Neville Chamberlain appointed him First Lord of the Admiralty on September 3rd, 1939.In 1940 Churchill succeeded Chamberlain as prime minister and during World War II he successfully secured military aid and moral support from the United States. He travelled endlessly during the war establishing close ties with leaders of other nations and co-ordinated a military strategy which subsequently ensured Hitler''s defeat.His tireless efforts gained admiration from all over the world. He was defeated however during the 1945 election by the Labour party who ruled until 1951. Churchill regained his power in 1951 and lead Britain once again until 5th April 1955 when ill health forced him to resign. He spent much of his latter years writing (The History of the English-Speaking People) and painting. In recognition of this historical studies he received the Nobel Price for Literature in 1953 and in 1963 the US Congress conferred on him honorary American citizenship.In 1965, at the age of 90 he died of a stroke. His death marked the end of an era in British History and he was given a state funeral and was buried in St. Martin''s Churchyard, Bladon, Oxfordshire. During all of his life he had served no less than six British monarchs: Queen Victoria, Edward VII, George IV, Edward VIII, George VI and Elisabeth II.