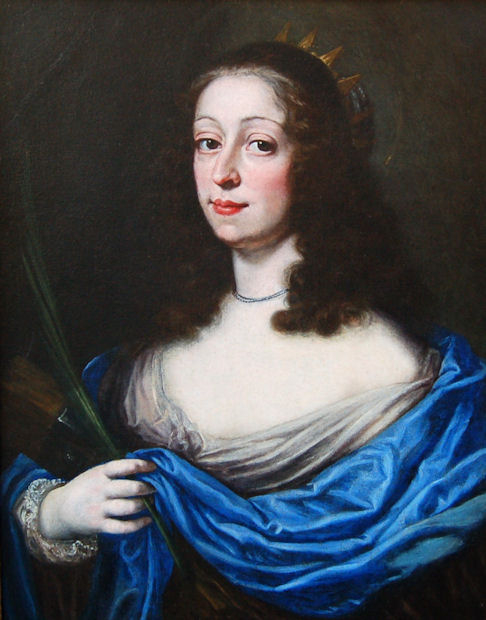 in a gilt frame, 34 1/4"h. 28 1/4"w
Vittoria della Rovere (7 February 1622 - 5 March 1694) was Grand Duchess of Tuscany as the wife of Grand Duke Ferdinando II and suo jure Duchess of Rovere and Montefeltro. She bore Ferdinando two children: Cosimo III, Tuscany''s longest reigning monarch, and Francesco Maria de'' Medici, a prince of the Church. Vittoria was the only child of Claudia de'' Medici and Federico Ubaldo della Rovere, son of the then incumbent Duke of Urbino, Francesco Maria II della Rovere.
Vittoria was supposed to inherit her grandfather''s duchy, but Pope Urban VIII convinced Francesco Maria to resign it to the the Papacy . Instead, she received the della Rovere allodial possessions, the Duchies of Rovere and Montefeltro, and art collection.
When her elder son''s wife, Marguerite Louise d''Orl?ans, abandoned Tuscany in 1675, Vittoria was made guardian of her children: Anna Maria Luisa, Ferdinando and Gian Gastone.
The last descendant of the della Rovere family, Dukes of Urbino, she was born in Pesaro to Federico Ubaldo della Rovere and Claudia de'' Medici, the daughter of Ferdinand I of Tuscany. She received a deep Catholic education.
Vittoria was betrothed to her cousin Ferdinando in 1623 and married in 1634. She was the potential heir to the duchy of Urbino when her grandfather, the duke Francesco Maria II della Rovere died. However, the duchy was annexed to the Papal States by Pope Urban VIII. Regardless, in 1631, the Medici obtained the rich art collections of the family, now in the Uffizi and Palazzo Pitti.
After bearing two children who died early, disputes arose about the education of their son Cosimo (born in 1642), whom Ferdinando wanted educated in a modern secular fashion. In the end, Vittoria forced a strict Catholic education on the boy. Shortly after the birth of Cosimo, the couple became estraged: Vittoria caught the Grand Duke and a page, Count Bruto della Molera, in bed together.They briefly reconciled in 1659, which resulted in the birth of their last child, Francesco Maria, in 1660. Ferdinando and Vittoria had, at best, an unhappy marriage and lived separately for many years.
Grand Duke Ferdinando died in 1670, Cosimo succeeded. Grand Duchess Marguerite-Louise and Vittoria vied with each other for power; the latter triumphed. Cosimo III assigned his mother the day to day administration of Tuscany. And Vittoria was formally admitted into the Grand Duke''sConsulta (Privy Council). Marguerite-Louise was embittered: she tiffed with Vittoria over precedence and the Consulta. Cosimo was firmly camped on his mother''s side. However, this only fueled the Grand Duchesses''s rage.
When her elder son''s wife, Marguerite-Louise d''Orl?ans, abandoned Tuscany in 1675, Vittoria was made guardian of her children: Anna Maria Luisa, Ferdinando and Gian Gastone.
In her old age, she made long stays in the convent of the Montalve, known as Villa La Quiete, as well as in the Villa del Poggio Imperiale. She died in Pisa in 1694.
Justus Sustermans (September 28, 1597 - April 23, 1681), also known as Giusto Sustermans, was a Flemish painter in the Baroque style. He was born in Antwerp and died in Florence.
Sustermans is chiefly notable for his portraits of members of the Medici family as he was their court painter. His work can be found in both the Palatina Gallery and the Uffizi Gallery in Florence, and in many other galleries around the globe. During his lifetime he was f?ted as the finest portrait painter in Italy.
He studied early on in Flanders and Antwerp, possibly with artists such as Willem de Vos (a nephew of the painter Marten de Vos) and alsoFrans Pourbus the younger. He was eventually invited to Florence under the patronage of the Medici Family where he studied Italian portraitists such as Il Guercino, the Spanish Diego Vel?zquez and France''s Pierre Mignard. While in Italy he also became influenced by the Venetian artists.