portrait of thomas elder of forneth 1737-1799, lord provost of edinburgh 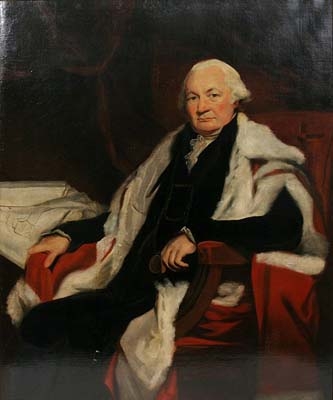 Thomas Elder, 1737-1799, lord provost of Edinburgh, was the eldest son of William Elder of Loaning, by his wife Elizabeth, whose maiden name was Man. The date of his birth is not known, but he was baptised on 7 Oct. 1737 (Parochial Registers, county of Perth, Clunie). Elder held the office of chief magistrate of the city (where he carried on the business of a wine merchant) for three different
periods, viz. 1788-90, 1792-1794, and 1796-8. He set up as a merchant in Edinburgh, joining the town council, and became master of the Merchant Company in 1779.During his second term of office he took a very active part in suppressing the meetings of the Friends of the People, and without any military aid he broke up the meeting of the British Convention held at Edinburgh on 5 Dec. 1793, and took ten or twelve of the principal members prisoners.On the formation of the Royal Edinburgh Volunteers in the summer of 1794 he became their first colonel, and on 9 Sept. in the same year was voted a piece of plate by the town council ?for his spirited and prudent conduct while in office, and especially during the late commotions.? In 1795 Elder was appointed postmaster-general for Scotland. Through his exertions the scheme for rebuilding the college was successfully matured. The foundation-stone of the new buildings was laid during his first mayoralty on 16 Nov. 1789, but they were not completed until after his death, which took place at Forneth, in the parish of Clunie, on 29 May 1799, in the sixty-second year of his age. He was buried in the old church of Clunie on 2 June. In 1765 Elder married Emilia, the eldest daughter of Paul Husband of Logie, an Edinburgh merchant, by whom he left one son and four daughters. His eldest daughter, Isabella, was married on 9 Aug. 1792 to George Husband Baird [q.v.], who afterwards became principal of Edinburgh University.Elder''s portrait, by Raeburn, which was painted in 1797 at the request of the principal and professors of the university, is preserved in the court room of the university. It has been engraved by Earlom. A duplicate of this portrait was exhibited at the Raeburn exhibition in Edinburgh in 1876 (Catalogue, No. 210). Two etchings of Elder by Kay will be found in Kay''s ?Original Portraits? (Nos. 144 and 310).