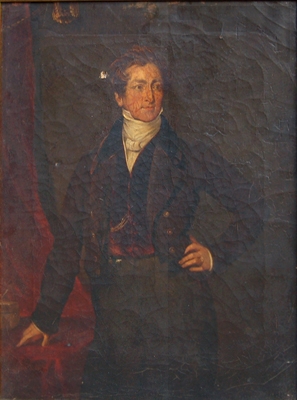 Sir Robert Peel, 2nd Baronet (5 February 1788 ? 2 July 1850) was the Conservative Prime Minister of the United Kingdom from 10 December 1834 to 8 April 1835, and again from 30 August 1841 to 29 June 1846. He helped create the modern concept of the police force while Home Secretary (leading to officers being known as "bobbies", in England, or Peelers, in Ireland, to this day), oversaw the formation of the Conservative Party out of the shattered Tory Party, and repealed the Corn Laws. Peel was born in Ramsbottom, Bury, Lancashire, England to the industrialist and Member of Parliament Sir Robert Peel, 1st Baronet. His father was one of the richest textile manufacturers of the early Industrial Revolution. Peel was educated first at Hipperholme Grammar School, then at Harrow School and finally Christ Church, Oxford, where he took a double first in classics and mathematics. He is also believed to have briefly attended Bury Grammar School. While living in Tamworth, he is credited with the development of the Tamworth Pig by breeding Irish stock with some local Tamworth pigs.Peel entered politics at the young age of 21 as MP for the Irish rotten borough of Cashel, Tipperary. With a scant 24 voters on the rolls, he was elected unopposed. His sponsor for the election (besides his father) was the Chief Secretary for Ireland, Sir Arthur Wellesley, the future Duke of Wellington, with whom Peel''s political career would be entwined for the next 25 years. Peel made his maiden speech at the start of the 1810 session, when he was chosen by the Prime Minister, Spencer Perceval, to second the reply to the king''s speech. His speech was a sensation, famously described by the Speaker, Charles Abbot, as "the best first speech since that of William Pitt."For the next decade he occupied a series of relatively minor positions in the Tory governments: Undersecretary for War, Chief Secretary for Ireland, and chairman of the Bullion Committee (charged with stabilizing British finances after the end of the Napoleonic Wars). He also changed seats twice: first picking up another rotten borough, Chippenham, then becoming MP for Oxford University in 1817.