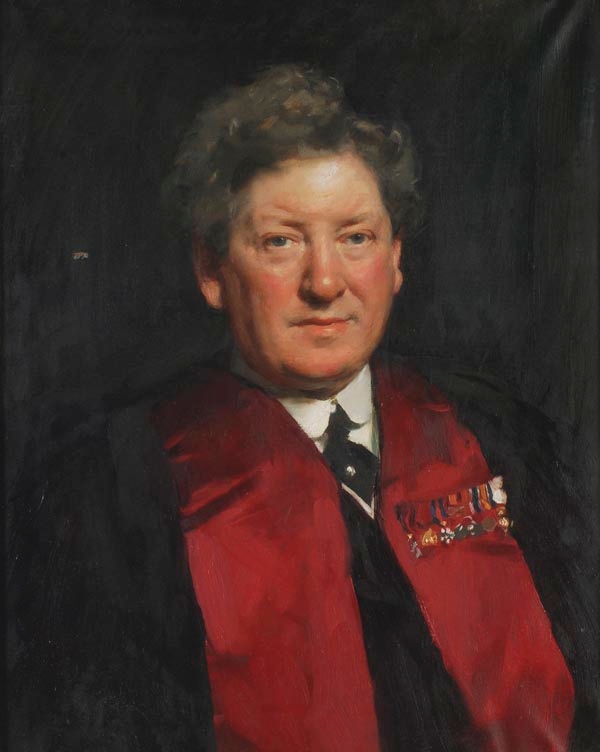 LYNN-THOMAS , Sir JOHN ( 1861 - 1939 ), K.B.E.,
C.B., C.M.G., F.R.C.S.? Cr. 1919. surgeon ; b. 10 Sept. 1861 at Cwmgefeile , Llandysul, Cards. , the son of Evan Thomas , farmer . He studied medicine at the London Hospital ( M.R.C.S. 1886 , F.R.C.S. 1892 ). His essay on fractures of the skull was awarded the Hutchinson Prize , 1890 . He was elected assistant surgeon at Cardiff Royal Infirmary , 1895 , and promoted surgeon later. He became the first purely consulting surgeon in Wales . He developed excellent operating techniques and by travelling widely became familiar with the work of many prominent clinics abroad. As the disciple of Kocher of Berne he took particular interest in thyroid surgery . He devised his own operation for removal of prostate and invented a forceps tourniquet for haemorrhage-prevention in amputation of hip . He wrote numerous original papers and took a leading part in the surgical advances of his time. He was a pioneer of modern surgery in Wales ; he raised the standard of operative surgery at Cardiff Royal Infirmary and paved the way to its becoming the teaching hospital of the Welsh National School of Medicine .

He served with and ultimately commanded the Welsh Hospital in South Africa in the Boer War and was awarded the C.B. afterwards. In the first world war he was colonel A.M.S. and Deputy Inspector of Military Orthopaedics, Western Command . He founded the Prince of Wales Hospital , Cardiff , for limbless sailors and soldiers ; this hospital was afterwards expanded to embrace other crippling disabilities, and was thus converted into an orthopaedic hospital . He was awarded the C.M.G. in 1917 and became K.B.E. in 1919 .
In 1921 he retired to Llwyndyrus , Llechryd, Cards. , where he took an active interest in the Cardigan War Memorial Hospital . He was a J.P. and D.L. of Cardiganshire and served as high sheriff , 1907-8 . During his years at Llwyndyrus he became a very enthusiastic amateur archaeologist , eventually propounding theories in regard to the archaeological importance of the district between Llwyndyrus and Cardigan . Some of these theories were set forth by him in a book called The Key of All Wales . Much to his chagrin, however, his conclusions were not acceptable to professional archaeologists .
Son of the late Evan Thomas, Esq., of Gwmgefeile,Cardiganshire ; b. 1861 ; m. 1892 Mary Eosina, only dau. of the late Edward Jenkins, Esq., of Cardiff. Sir John Thomas, who was educated at the London Hospital (L.E.C.P. 1886, F.R.C.S. 1892) and in Vienna, was formerly House Surgeon to London Hospital, Junior Deputy Chancellor Univ. of Wales, and Major R.A.M.C, T.F. ; is a J.P. for Glamorganshire and for Cardiganshire (High Sheriff 1907) ; temp. Hon. Col. A.M.S. ; Surgeon to King Edward VII. Welsh National Memorial Hospital and Consulting Surgeon, W. Command, to Prince of Wales''s Hospital, Cardiff, to Hamadryad Hospital, to Cardiff Provident Dispensary, to Forth Hospital and to
Bridgend Hospital. ? Greenlawn, Penylan, Cardiff; Stradmore, Cenarth, Carmarthenshire ; R. Automobile Chib, s.w. ; Garrick Club, w.c. ; Cardiff and County Club, Cardiff. He died. at Llwyndyrus , 21 Sept. 1939 .
Bibliography: British Medical Journal , 1939 , ii, 708;
The Lancet , London, 1823- , 1939 , ii, 808.Author:Arthur Rocyn Jones, F.R.C.S., London.