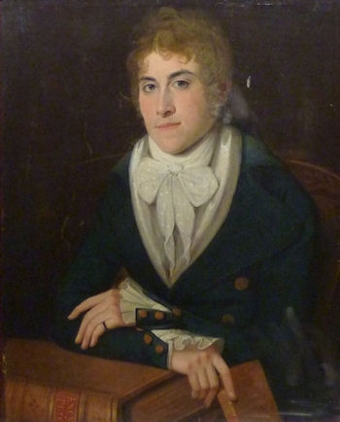 Thomason, Sir Edward (bap. 1769, d. 1849), manufacturer of buttons and jewellery and publisher of medals, was baptized in Birmingham on 14 November 1769, the son of Edward Thomason, a buckle manufacturer, and his wife, Catherine. He served as an apprentice in Matthew Boulton''s factory in Soho, Birmingham, from the age of sixteen to twenty-one. In the early 1790s he opened his own factory, in the premises in Church Street, Birmingham, where his father, then retired, had previously had his business. He began by manufacturing gilt and plated buttons, expanding subsequently into the production of jewellery; a medal and token department was added by 1807; three years later he began plating steel cutlery, and the silver- and gold-plating side of the business expanded to include larger objects thereafter. He also did large-scale castings. His experiments with various mechanical devices, recorded in his Memoirs (1845), were not always successful, and the automatically folding carriage step, for which he took out patents in 1796 and 1798, was defeated by the fashion from 1799 for curved carriage doors. Nevertheless, in 1800 he was a founder member of the Birmingham Philosophical Society, and, as a result of his entrepreneurial skills and flair for self-promotion, grew to become an eminent citizen of ?the toy shop of Europe?, as Birmingham came to be known. Thomason turned his mind to inventions. His first prject, dating to 1796, was a design for an unmanned fire ship that would destroy the French fleet whilst they were still in dock: it was rejected by the Admiralty. This project was followed, in 1797, by the idea of a wind powered water pump that again failed to impress. The next invention was a retractable carriage step in 1799, found some favour, he patented the device and manufactured and sold some one hundred sets to coach makers. The year 1799 saw Edward Thomason getting married to Phillis Bown Glover. On the 7th May 1802 Thomason hit the jackpot when he entered patent no 2617, for an improvement to the corkscrew. The next fourteen years saw his factory turn out 130,000 units before allowing others to manufacture under licence and the design is still to this day considered by many to be the finest corkscrew ever made. Perhaps Thomason knew this as each one carried the motto ?Ne Plus Ultra? (None Better).

His success with inventions continued, including the extending toast fork complete with ejector plate in 1809, and such diverse items as swordsticks, walking canes that incorporated a cigar lighter, safety catches for guns. He even created a patented dice thrower, albeit strictly for backgammon; Thomason was a devoutly religious man. The year 1806 and 1807 aw a great shortage of coinage in Great Britain with Boulton and Thomason working flat out supplying tokens. Thomason is known to have supplied two orders to Welsh mine owners for ?5000 and ?10,000 of silver and bronze tokens , and crowns, Half crowns, shillings and sixpences for the Douglas Bank of the Isle of Man. His reputation saw him receive orders for coinage as far afield as Africa.In 1807 Thomason produced the first British electioneering medals, for the candidates in the Yorkshire elections. In 1809 he manufactured a medal of his former employer Matthew Boulton, engraved by Peter Wyon after Peter Rouw, which was one of the largest medals then to have been struck. About this time he also made his first medallic series, of six European sovereigns. January 1810 saw Thomason extend his factory to start production of close plated knives, forks and spoons. The following year he received an order for two million copper tokens from Samuel Fereday the great Iron-master. In 1811?12 he struck many tokens, produced in response to the scarcity of small change. Notable among these are those produced for his own establishment, for the Douglas Bank Company of the Isle of Man, and for the ironmaster Samuel Fereday, all of 1811. In 1812 he produced gold and silver tokens for Berkeley Monck, and in 1815 he struck penny tokens for Magdalen Island, Canada. In May 1814 Thomason travelled to Paris with his wife, Phillis Bown Glover (d. 1861), whom he had married on 26 August 1799, and his son Henry Botfield Thomason (1802?1843).The Napoleonic wars offered plentiful subjects for medals: one celebrating the treaty of Paris (1814) was especially popular. In 1817 Thomason entered into an agreement with James Mudie to strike a series of medals recording British victories over Napoleon; the dies were engraved by English and French artists, and the results were published by Mudie in An Historical and Critical Account of a Grand Series of National Medals (1820). Thomason subsequently purchased the dies. In 1819 he began a series of forty-eight medals of the Elgin marbles in the British Museum, which was completed by 1823. In 1828 his workmen finished a series of sixteen medals on scientific subjects, and two years later sixty medals on biblical subjects. Developing his usual practice of presenting medals to important figures, he sent examples of the biblical series to all European monarchs, as well as to the president of the United States and the emperor of China (who returned his). In return for these, and also for his work as vice-consul for Birmingham for several countries, he received several orders and decorations. Thomason was appointed vice-council at Birmingham to no less than eight countries, France, Austria, Russia, Spain, Portugal, Brazil , Sweden and Norway and was personally awarded over thirty foreign orders of merit. In 1818 he was made High Bailiff of Birmingham Thomason was knighted by William IV in 1832. A series of medallets of ?Bible truths? and ?Testamental Truths? was published in 1835. He also continued to strike a series of medals of British monarchs from eighteenth-century dies engraved by the Dassiers. Among the Birmingham engravers to work for Thomason were Thomas Halliday and Thomas Webb, and he was also associated with Charles Jones. Thomason sold his factory to George Richmond Collis, seemingly in 1835, and retired fully in 1844. He subsequently lived in Ludlow, Bath, and Warwick, and died at his home in Jury Street, Warwick, on 29 May 1849. He was buried at St Philip''s Church, Birmingham.Philip Attwood