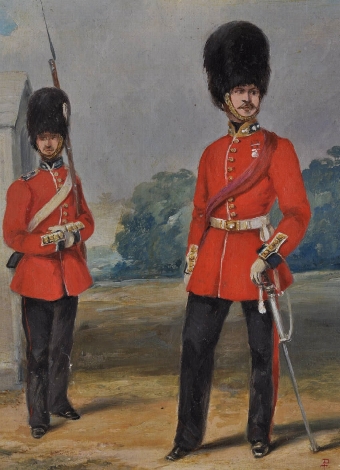 The tunic ype jacket came in , in 1856 at the very end of the Crimean War and replaced the cut-away coat with tails. It would mean that the grenadiers in this painting were late 1850''s early 1860''s. The guardsman appears to be carrying the rather long Enfield Rifled Musket with a socket bayonet, i.e one with a handle like knife. The standard infantry firearm gradually became shorter and "Sword Bayonets" (blades with handles rather than spikes without handles) in decades post 1860.

The Grenadier Guards (GREN GDS) is an infantry regiment of the British Army. It is the most senior regiment of the Guards Division and, as such, is the most senior regiment of infantry. It is not, however, the most senior regiment of the Army, this position being attributed to the Life Guards. Although the Coldstream Guards was formed before the Grenadier Guards, that regiment is ranked after the Grenadiers in seniority as it was a regiment of the New Model Army.The grouping of buttons on the tunic is a common way to distinguish between the regiments of Foot Guards. Grenadier Guards'' buttons are equally spaced and embossed with the Royal Cypher reversed and interlaced surrounded by the Royal Garter bearing Honi soit qui mal y pense (Evil be to him who evil thinks ). Their "Buff Belt" brass clasped also carry the Royal Cypher, modern Grenadier Guardsmen wear a cap badge of a "grenade fired proper" with seventeen flames. This cap badge has to be cleaned twice a day, once in the morning and once in the afternoon, as it is made from brass and a tarnished grenade is frowned upon by all in the regiment.The Grenadier Guards traces its lineage back to 1656, when Lord Wentworth''s Regiment was raised in Bruges, in the Spanish Netherlands (current-day Belgium), where it formed a part of exiled King Charles II''s bodyguard. A few years later, a similar regiment known as John Russell''s Regiment of Guards was formed. In 1665, these two regiments were combined to form the 1st Regiment of Foot Guards, consisting of 24 companies of men. Since then the Grenadier Guards have served ten Kings and three Queens, including currently Queen Elizabeth II. Throughout the 18th century, the regiment took part in a number of campaigns including the War of Spanish Succession, the War of Austrian Succession and the Seven Years'' War. At the end of the Napoleonic Wars, the regiment gained the name "Grenadier" in July 1815 following a Royal Proclamation, honouring their part in defeating Grenadiers of the French Imperial Guard at the Battle of Waterloo.During the Victorian era, the regiment took part in the Crimean War, participating in the fighting at the Alma river, Inkerman, and Sevastapol. For their involvement in the conflict, four members of the 3rd Battalion received the Victoria Cross. Following this they were involved in the fighting at Battle of Tel el-Kebir during the Anglo-Egyptian War in 1882, and then the Mahdist War in Sudan, where its main involvement came at the Battle of Omdurman. During the Second Boer War, the 2nd and 3rd Battalions were deployed to South Africa where they took part in a number of battles including the Battle of Modder River and the Battle of Belmont, as well as a number of smaller actions. In 1900, 75 men from the regiment were used to raise a fourth Guards regiment, known as the Irish Guards in honour of the role that Irish regiments had played in the fighting in South Africa.