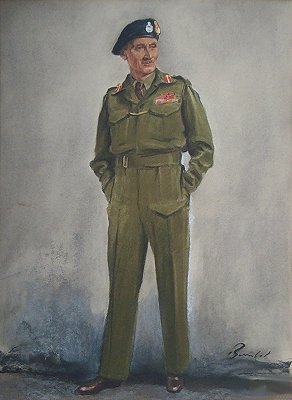 Montgomery, Bernard Law, 1st Viscount Montgomery of Alamein , 1887-1976, British field marshal. Educated at Sandhurst, he entered the army in 1908 and served in World War I. In World War II he commanded (1939-40) the 3d Division in France until the evacuation of Dunkirk. In 1942 he was sent to Egypt to command the British 8th Army in Africa under the Middle Eastern Command headed by Gen. Sir Harold Alexander. Winning the battle of Alamein and driving the Germans 2,000 mi (3,200 km) across Africa into Tunisia (see North Africa, campaigns in) made Montgomery an idol of the British public. He led the 8th Army in Sicily and Italy until Dec., 1943. He helped formulate the invasion plan for France, and in the Normandy campaign he was field commander of all ground forces until Aug., 1944, then led the 21st Army Group. When the Germans advanced in the Battle of the Bulge, he was given temporary command of two American armies. Afterward his troops thrust across N Germany to the Baltic, and he headed (1945-46) the British occupation forces in Germany. He was made field marshal in 1944 and viscount in 1946. He was chief of the imperial general staff from 1946 to 1948, when he became chairman of the commanders in chief in committee under the permanent defense organization of Britain, France, Belgium, the Netherlands, and Luxembourg. From 1951 to 1958 he was deputy supreme commander of the Allied forces in Europe. His writings include Forward to Victory (1946), Normandy to the Baltic (1947), Forward from Victory (1948), El Alamein to the River Sangro (1948), An Approach to Sanity (1959), The Path to Leadership (1961), and A History of Warfare (1968).