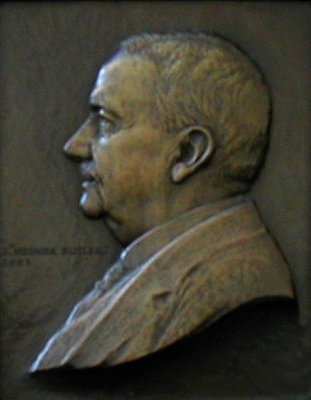 Frank Hedges Butler, 1855-1928, balloonist and pioneer of flying, was born in London 17 December 1855, the fifth son of James Butler, wine merchant, of Hollywood, Wimbledon Park, by his wife, Frances Mary, eldest daughter of William Hedges. He was educated at private schools at Brighton and Upper Clapton and, after travelling on the continent and in South America, entered the family business of Hedges & Butler (founded in 1667), Regent Street, London, in which he became a partner in 1882. He married in 1880 Ada (died 1905), daughter of Joseph Bartholomew Tickle, wool broker, of London and Sydney, and by her had one daughter, who shared many of his motoring and ballooning adventures.Hedges Butler was one of the first persons in England to own a motor-car. He acquired a Benz car in 1897, and in the same year was appointed first honorary treasurer of the newly-formed Automobile Club of Great Britain, a post which he held until 1902. It was the shortcomings of a motor-car, and the consequent abandonment of a motor tour in Scotland in September 1901, which led Butler to turn his attention to the air. A balloon ascent was suggested instead of the tour, and Butler and his daughter, accompanied by the Hon. Charles Stewart Rolls [q.v.], went up in a balloon, the City of York, from the Crystal Palace, with Mr. Stanley Spencer in control. While in the air over London, Butler suggested the formation of an Aero Club as a branch of the Automobile Club. The suggestion bore fruit, and the Aero Club of the United Kingdom was registered at Somerset House in October 1901, and the first balloon ascent organized by the club took place in November.The club (which in 1910 became the Royal Aero Club) brought together inventors and sportsmen, and supplied them with a ground at Shell Beach, Isle of Sheppey, suitable for their experiments. When the club was founded no power-driven aeroplane had yet been flown, and the members were chiefly interested in the balloon and the airship. When, however, the invention of flying became a reality, Hedges Butler took a keen interest in the early experiments, and in 1908, when the American inventor, Wilbur Wright, came over to France in order to demonstrate his aeroplane, Butler was one of the first
two Englishmen to fly as passenger with him.By 1907 Hedges Butler had completed one hundred balloon ascents, including a solo flight which established a record for distance in England (1902), and the world''s longest cross-Channel balloon voyage (London to Caen, 1905).
As a result of the successful flights by Wilbur Wright in France in 1908, the Aero Club undertook the training of aeroplane pilots, to whom, from 1910 onwards, it issued its certificates; these were recognized by the government when it was decided to establish a national air service. The Aero Club, indeed, played an all-important part in fostering the early development of flying in England, and it was Hedges Butler who inspired the club''s activity in this respect and supplied much practical help. Although he did little flying himself after 1908, his interest and enthusiasm never flagged.Hedges Butler''s concern with the air diminished in no way his interest in travel. In the course of his business he often visited the wine-producing countries of Europe, but these journeys only stimulated his enthusiasm, and with great enjoyment he moved widely about the world. He told the story of his adventures in Five Thousand Miles in a Balloon (1907),
Through Lapland with Skis and Reindeer (1917), Fifty Years of Travel by Land, Water, and Air (1920), Round the World (1924), and Wine and the Wine Lands of the World (1926). He was elected F.R.G.S. in 1877.Hedges Butler had still other interests. He was a violinist of merit, and in 1894 founded the Imperial Institute Orchestral Society, in which he played one of the first violins. He was a man of hospitable nature with a gift for friendship, who enjoyed splendid health, as well as ample means to indulge his many enthusiasms. He died in London 27 November 1928.A cartoon of Hedges Butler by ''Spy'' appeared in Vanity Fair 11 December 1907.

Introduction
The Competitions Club of the British Balloon and Airship Club is the body responsible for the organisation and administration of Competition Ballooning in the UK. As such, it is involved with a number of other bodies, both in the UK and Internationally. The following information gives some brief details as to the organisation and inter-relationships of these bodies. Organisational Diagram
The FAI
The F?d?ration A?ronautique Internationale (FAI), or International Aeronautic Federation, is the international authority which looks after all the sporting activities which take place in the air. It was founded in 1905 to promote the new science and sport of manned flight, which at the time consisted mostly of ballooning. The FAI was formed because the International Olympic Committee was not interested in having aerial sports, such as ballooning, as part of its activities.It is a non-governmental and non-profit making international organisation with the basic aim of furthering aeronautical and astronautical activities worldwide. Much of the work for which the FAI is nominally responsible is devolved to the various National Aero Clubs for matters relating to each Nation; and the various particular Airsport commissions for matters relating to individual airsports.The FAI web site is at: http://www.fai.org/. The CIA
No, not that CIA! The Commission Internationale D''Aerostation (CIA) or Ballooning Commission was started by the FAI in 1946 to conduct balloon competitions, promote the development of ballooning equipment and foster friendship among aerostat pilots of all nations. Other organisations (e.g. Rotorcraft Commission, Aeromodelling Commission, General Aviation Commission, Parachuting Commission etc.) exist within the FAI to administer other aviation sports. The CIA looks after the Sporting Code,Section 1 which controls ballooning competitions and records. The CIA consists of delegates appointed by the member countries who meet every year in General Conference to discuss matters related to international ballooning. The BBAC annually appoints one delegate and one alternate delegate to the CIA. Five delegates (President, 3 Vice-Presidents and the Secretary) are elected to form the BUREAU, which is empowered to make emergency decisions at any time outside the General Conference. The work of the CIA is generally delegated to various sub-committees, each comprised of individuals from the international ballooning community. The CIA web site is at: http://www.fai.org/ballooning/. The Royal Aero Club
The Royal Aero Club (RAeC) was founded in 1901 and is the National Aero Club of the UK. The Patron of the Royal Aero Club is Her Majesty the Queen. The President is His Royal Highness The Duke of York. The RAeC was set up by Frank Hedges Butler up as a direct result of a flight he had in a gas balloon from the grounds of Crystal Palace. The aerial party consisted of Mr Butler, his daughter Vera Butler, the Hon. C. S. Rolls and Mr Stanley Spencer. A few days after the flight the Aero Club of the United Kingdom was registered at Somerset House, through the secretary of the Automobile Club, the committee of which institution looked to the Aero Club to control the science and sport of balloons, airships and aeroplanes in Great Britain.The Royal Aero Club is the co-ordinating body of the following British Airsport Organisations:
British Aerobatics
British Balloon & Airship Club
British Gliding Association
British Hang Gliding Association
British Microlight Aircraft Association
British Model Flying Association
British Parachute Association
British Precision Pilots Association
Formula Air Racing Association
Helicopter Flying Club of Great Britain
Popular Flying Association
RAeC Records, Racing & Rally Ass.It is through the Royal Aero Club that the BBAC is a member of the F?d?ration A?ronautique International and Europe Aerosports. Invitations for the BBAC to nominate British balloon pilots to compete in World and European Championships must come via the Royal Aero Club.