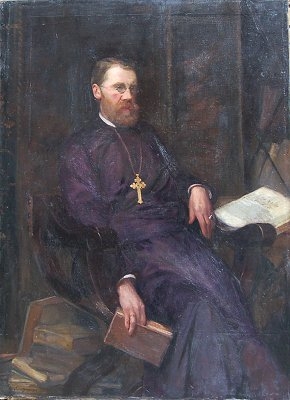 Talbot, Edward Stuart 1844-1934, bishop successively of Rochester, Southwark, and Winchester, the younger son of John Chetwynd Talbot, Q.C., son of the second Earl Talbot and a leader of the parliamentary bar, by his wife, Caroline Jane, only daughter of James Archibald Stuart-Wortley-Mackenzie, first Lord Wharncliffe [q.v.], was born in London 19 February 1844. The Talbot family is an ancient one, many of whose members, including Edward Talbot''s nephew Sir G. J. Talbot [q.v.], have reached legal and political eminence. His father, who was a strong supporter of the Oxford movement, died in 1852, and his widowed mother formed a close friendship with the two sisters Lady Lyttelton and Mrs. Gladstone. Sent as a day boy to Charterhouse, he was compelled by illness to leave in 1858. He proceeded to Christ Church, Oxford in 1862, obtained a first class in literae humaniores (1865) and in law and modern history (1866), and was elected in the last-named year a senior student of Christ Church, where he remained for four years as modern history tutor. In 1869 he was appointed first warden of Keble College, Oxford, and was ordained deacon. In 1870 he was ordained priest and married
Lavinia, third daughter of George William Lyttelton, fourth Lord Lyttelton [q.v.]: her eldest sister was the wife of his brother
J. G. Talbot.

In the autumn of 1870 Talbot went into residence at Keble. The university as a whole regarded the new foundation with contempt. To meet the situation no better warden than Talbot could have been found, and for eighteen years he presided successfully over the college. He aimed at giving it a sure foundation as a college in the university where men of limited means might lead a full common life under the influence of the Church of England. A true son of the Oxford movement, Talbot acknowledged the Tractarians as his spiritual fathers. He contributed to Lux Mundi in 1889, but in contrast to that of Charles Gore [q.v.] his essay on ?The Preparation in History for Christ? did not provoke controversy. Like all the Lux Mundi school, Talbot was concerned to bring Tractarian principles into relation with the thought of the later nineteenth century. It was mainly due to his initiative that Lady Margaret Hall was founded at Oxford in 1878 as a definitely Church of England college for women.In 1888 Talbot accepted the vicarage of Leeds, where he remained for six years (1889-1895). It was a profound change to a busy Yorkshire parish, where he found himself in contact with hard-headed business men, the crowds of the working classes, and many members of the Free Churches. Once when asked to which political party he belonged, he replied: ?Conservative with a bad conscience.?
Leeds was sorry to lose him when in 1895 Talbot became bishop of Rochester. To the episcopate he brought high academic distinction as well as educational and parochial experience. He continued the scheme inaugurated by his predecessors of dividing his unwieldy diocese, thus separating the agricultural area round Rochester from the populous area of south London, where he had always had his bishop''s house. After protracted negotiations the work was accomplished, and Talbot was able to complete the other task which he had inherited, namely, that of making the old church of St. Saviour''s, Southwark, the cathedral of the new diocese. He was enthroned there in 1905. His relationship with his clergy was friendly, although breaches of Prayer Book order by some of them placed him in a difficult position. The evangelical party suspected him as a Tractarian bishop, while high churchmen resented his efforts to restore order. As time passed he was understood, and won the respect and love of all his clergy. Not a ready speaker, at times he was hesitating, and in his anxiety to make his points clear addressed his audience at too great a length. He showed that a high churchman could work with evangelicals and liberals, and could understand Free churchmen also.In 1911 Talbot was translated to the bishopric of Winchester, which he held for twelve years. It was the autumn of his life, but it was still a full and busy life. His prestige stood high and he spoke with great authority in the councils of the Church. One of Archbishop Davidson''s staunchest supporters, he was noted for his width of view and his great gift of fairness. The last ten years of his life were spent in retirement in Kensington, where he died 30 January 1934. As The Times obituary notice rightly says, ?he helped to create, as well as to maintain, a tradition essential both to religious and to national life?.
Talbot celebrated his golden wedding while bishop of Winchester in 1920. Mrs. Talbot survived him until 1939. They had three sons and two daughters. Of the sons, Edward became superior of the community of the Resurrection; Neville (died 1943) became bishop of Pretoria and was afterwards vicar of St. Mary''s church, Nottingham; and Gilbert, in whose memory the original Toc H was founded, was killed in action in 1915. A portrait in oils of Talbot by George Richmond, painted in 1876, hangs in the hall of Keble College, of which he was elected the first honorary fellow in 1931. There is another portrait in Christ Church, painted by H. Harris-Brown. A cartoon of him as bishop of Rochester by ?Spy? appeared in Vanity Fair 21 April 1904.Henry Harris Brown was born in Northamptonshire 29 dec 1864. Studied in Paris under Bouguereau and Fleury. Settled in London 1891, where he enjoyed a successful practice. Exhibited RA (55), RHA (10). He also worked in the USA and Canada.