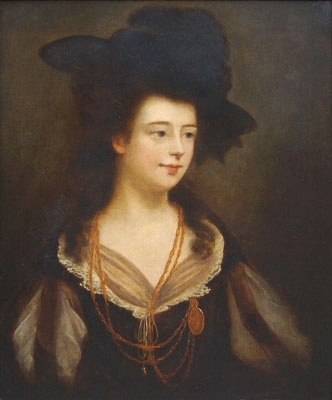 Catherine Horneck is the daughter of Captain Kane William Horneck. and daughter of Hannah Horneck.Catherine married the famous charicaturist Henry William Bunbury, son of Reverend Sir William Bunbury, 5th Bt. and Eleanor Graham, in 1771.1 Her married name became Bunbury. Her son Sir Henry Edward Bunbury became the 7th Baronet. Catherine and Her sister were born in Devon and were associated with Sir Joshua Reynolds also from Devon. Miss Horneck was one of two pretty sisters who, upon their father''s death, had become wards of Sir Joshua, the family being old Devonshire acquaintances of his. They were now living in London with their mother, and were key beauties and wits in society. Goldsmith, who knew them well, playfully named Miss Catherine "Little Comedy" from the resemblance between her face and that of the allegorical figure of Comedy in one of Reynolds''s portraits of Garrick. By a pleasant coincidence the year 1768 brought to Reynolds''s studio for portrait sittings two young people who began an acquaintance at this time which had a romantic ending. They were Miss Catherine Horneck and Henry William Bunbury, who were married a few years later, and were the parents of the little boy in our picture. Mr. Bunbury was a gentleman of family and fortune, who had unusual artistic talent. His special forte was in humorous subjects and caricatures, and his works were sought and praised by connoisseurs.

Reynolds must have followed with affectionate interest the lives of these young friends whose attachment had been fostered in his studio. He always felt a fatherly regard for Mrs. Bunbury and a generous admiration for her husband''s artistic work. They has their eldest son Charles John painted by Reynolds in 1772. The portrait of Master Bunbury was evidently painted by Reynolds for his own pleasure, and retained by him during his lifetime, after which it passed by bequest to the boy''s mother. Catherine Bunbury was also painted in a double portrait with her sister Mary Horneck , later Mary Gwyn by Reynolds. It was also through Reynolds that Catherine met her future husband Henry William Bunbury in 1768 , who were married a few years later in 1771. Catherine spent much of her time in the circle of Reynolds, Dr Johnson, Dr Percy and Susan Burney, Ignatius Sancho, the Duke and Duchess of York, Sir James Prior, Garrick and the Poet Oliver Goldsmith, ( he travelled to Paris with the Horneck family (Mrs Horneck, Mary, and Catherine, 1770, Mary, whom he met at 14, being his ?Jessamy Bride? ). "THOUGH Goldsmith found it impossible to break from his literary occupations to visit Bennet Langton, in Lincolnshire,he soon yielded to attractions from another quarter, in whichsomewhat of sentiment may have mingled. Miss Catherine Horneck, one of his beautiful fellow-travellers, otherwise called Little Comedy, had been married in August to Henry William Bunbury, Esq., a gentleman of fortune, who has become cele?brated for the humorous productions of his pencil. Goldsmith was shortly afterward invited to pay the newly married couple a visit at their seat at Barton, in Suffolk. How could he re?sist such an invitation--especially as the Jessamy Bride would, of, course, be among the guests? It is true, he was hampered with work; he was still more hampered with debt; his accounts with Newbery were perplexed; but all must give way. New advances are procured from Newbery, on the promise of a new tale in the style of the Vicar of Wakefield, of which he showed him a few roughly-sketched chapters; so, his purse replenished in the old way, "by hook or by crook," he posted off to visit the bride at Barton. He found there a joyous household, and one where he was welcomed with affection. Garrick was there, and played the part of master of the revels. These years of heavy work were among the happiest of Goldsmith''s life, for he had made the acquaintance of the Misses Horneck, girls of nineteen and seventeen. The elder, Catherine, or "Little Comedy," was already engaged; the younger, Mary, who had the loving nickname of the "Jessamy Bride," exercised over him a strong fascination. Their social as well as personal charms are uniformly spoken of by all. Mary, who did not marry till after Goldsmith''s death, lived long enough to be admired by Hazlitt, to whom she talked of the poet with affection unabated by age, till he "could almost fancy the shade of Goldsmith in the room, looking round with complacency."Henry William Bunbury (1750-7 May 1811), was an English caricaturist.The second son of Sir William Bunbury, 5th Baronet (see Bunbury Baronets), of Mildenhall, Suffolk, he came of an old Norman family. He was educated at Westminster School and St Catharine''s College, Cambridge, and soon showed a talent for drawing, especially for humorous subjects.His more serious efforts were no great success, but his caricatures are as famous as those of his contemporaries Thomas Rowlandson and James Gillray, good examples being his Country Club (1788), Barber''s Shop (1803) and A Long Story(1782). He was a popular character, and the friend of most of the notabilities of his day, whom he never offended by attempting political satire; his easy circumstances and social position (he was colonel of the West Suffolk Militia, and was appointed equerry to the Duke of York in 1787) allowed him leisure to practise his talents.His son Henry succeeded to the baronetcy.Henry Tresham was an Irish-born painter active in London in the late 18th century. His reputation was primarily gained through large-scale history paintings, somewhat similar in style to those of Henry Fuseli, but all of which are now lost. These were based on his travels to Rome. He was elected an Associate of the Royal Academy in 1791 and became a Royal Academician in 1799. He was professor of painting at the Royal Academy from 1807 to 1809. He was involved in several of the major history painting ventures of late 18th-century London, including Robert Bowyer''s History Gallery, the Boydell Shakespeare Gallery and Thomas Macklin''s Holy Bible. Among the surviving examples of his painting is The Earl of Warwick''s Vow before the Battle of Towton at Manchester City Art Gallery. Henry Tresham undertook his training at the Dublin Society of Artists where he won an exhibition prize in 1773. After trips to London and Rome, he stayed on in Rome for fourteen years where he met fellow artists including John Henry Fuseli, Thomas Banks and James Northcote. In Rome, Tresham?s taste was influenced by this circle of Neo-classical artists. Returning to London in 1789 he became a major figure in artistic circles. His works were frequently exhibited at the Royal Academy and he was appointed Professor of Painting at the Royal Academy. However, ill-health forced him to resign from this position. Throughout his career, Tresham worked as an art dealer, editor and poet. He achieved fame for his large-scale history paintings, all of which are untraced. These large-scale works were based on themes taken from Classical history and commissioned by Frederick Augustus Harvey, the 4th Earl of Bristol. Tresham also contributed to history painting projects such as Boydell?s Shakespeare Gallery. Engravings made after Tresham?s works are characterized by strong, muscular figures, mannered poses and elongated bodies. Tresham?s drawings represent a wider range of themes than the engravings that were made after his work and include landscape and genre scenes.