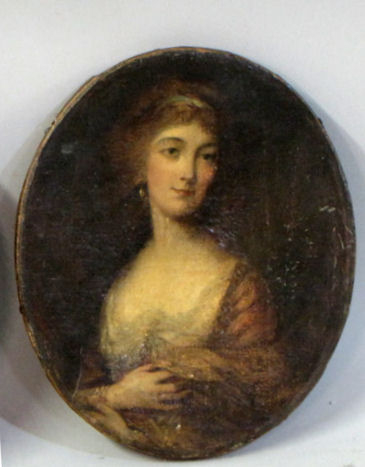 The portrait is a small-scale copy of the portrait of Anne Luttrell, Duchess of Cumberland By Thomas Gainsborough, now in the Huntington Art Collections I San Marino , California. It reproduces the appearance of the portrait before the overpaints were removed in about 1910. Once they were removed a portrait of the Duchess appeared with her hair dressed high dating from c. 1778 ? the arrangement of the hair in this copy reproduces a style of the 1790s painted after Gainsborough''s death. The portrait was a popular image late 18th early 19th century and reproduced on a number of occaisions. At the time the canvas belonged to Lord Wenlock