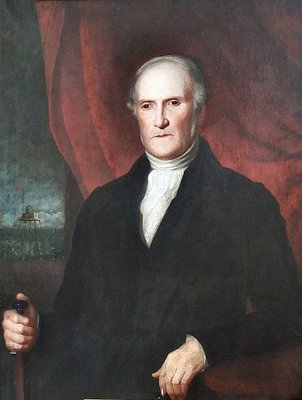 Alexander Mitchell was born on 13th April, 1780 in South WilliamStreet, Dublin.When he was young, he saw little of his father, who was an Inspector-General of British Barracks in Ireland. When he was seven, the family moved up north to Pine Hill near Belfast. Here, Mitchell went to school for the first time at the age of eight. They remained here for four years, during which time the eldest daughter Mary died, followed shortly by their father when Mitchell was 10.Mrs Mitchell with Alexander, his sister and two of his brothers rented a cottage a mile from Belfast . From here, Mitchell attended the best classical school in Belfast. He greatly enjoyed his school life, showing a marked taste for mathematics. But his sight always defective, declined rapidly, so that by the age of 16, he could no longer read (Possibly his sight may have been overstrained in his childhood, by lying on the floor of the hall in William street, reading by the dim light that came from the street lamp, through the fanlight over the door). Although this was the case, he seems to have learned a lot in school, as his family constantly came to him for help in geography, history and even spelling.In 1798, during the Irish Rebellion , Alexander (aged 18) was sent to friends in Scotland >. When he was 21, he married his neighbour Mary Banks, with whom he had five children. His mother was so displeased with this match, that she would not see him for over a year. It was around this time that he began to manufacture bricks, a prosperous business that continued for over 30 years, enabling him to buy ground and build about 20 houses in Belfast.His appearance was that of a strong and active man. He was tall, over 6ft in height with broad shoulders. He had many visitors to his home, including Dr.Romney Robinson , whose company he delighted in, and Dr.Boole the mathematician. Some people were not aware he was blind, as he turned to those he spoke to, and seemed to look directly at them. It is amusing to find out that people often played whist and backgammon with him, and ended the game without knowing that he could not see. That a daughter or grandchild sat at his side and mentioned the throw of the dice, or whispered the names of the cards, passed unobserved. In 1823, he wrote a paper on "Meteoric Stones" which was read at the Natural History Society, of which he was elected a member shortly thereafter. Living by the sea, he often pondered on the trials of shipwrecked men, and he set his mind to think out some means of warning ships of danger from rocky shores. In 1828 his thinking provided him with the answer. Four years later, he became known as the inventor and patentee of the "Mitchell Screwpile and mooring", a simple yet effective means of constructing durable lighthouses in deep water, on mud-banks and shifting sands, of fixing beacons, and of mooring ships. It was first used for the foundation of the Maplin Sand lighthouse, at the mouth of the Thames, in 1838. After the success of screwpiles had been established, they were applied to more extensive undertakings. The Government Breakwater at Portland, the long Viaduct and bridges on the Bombay and Beroda railway, the whole system of Indian telegraphs, and the Madras pier, were among the works accomplished with this invention. Mitchell''s improved method of mooring ships was likewise generally adopted.On the 9th May 1837, he was elected an Associate of the Institution of Civil Engineers , London. In 1839 he went to Belfast to prepare for building a lighthouse at Fleetwood. He did not spare himself any labour that he thought necessary for perfecting the work, but climbed the ladders, crawled along the planks, and examined the woodwork. When told he was risking a fall, he said he was safer than others, because by not seeing the water beneath him, he did not become giddy. On many occasions he stayed out the whole day, cheering his men at their work, and leading them in singsongs as they marched round on the raft driving in the screws.In July 1844 the lighthouse in Belfast Lough was finished. In November 1844 he was elected Associate of the Belfast Anacreontic society. He greatly enjoyed attending the various concerts they organised. He was very fond of music, understanding its theory and well versed in its history. In 1847 he went to Courtown , Co.Wexford, to build a pier there. The following year he built a new kind of boat, which he called the Zangada, and spent many happy hours sailing in it around Belfast Lough. His taste for mechanics was strong and he prepared a paper giving an account of the many mechanical projects he had carried out from early childhood. One of these contained the fundamental idea of the screw-propeller which was used on ships, whose captains'' reported an increased speed and a smaller consumption of coal.On the 20th June 1848, he was made a member of the Institution of Civil Engineers, and the Telford medal given to him. Later that year he built two lighthouses in Soldier''s point, Dundalk. In May 1851, he moved to Queenstown where he and his son laid the foundation for the lighthouse in the cove of Cork . During the winter months spent here, he amused himself by writing on the flight of birds and men'' efforts to fly.Even in his poorest and anxious days, Alexander Mitchell was full of good spirit. When friends called, there was always music, as he played the flute and accordion, and sang many Irish songs. In 1864, his wife died at the age of 86. He died four years later on 25th June, 1868. He is indeed a man to be honoured and admired, a man of enormous courage, hope and human sympathy, as well as a clear and vigorous intellect. His cheerfulness and independence led most people to forget his blindness.