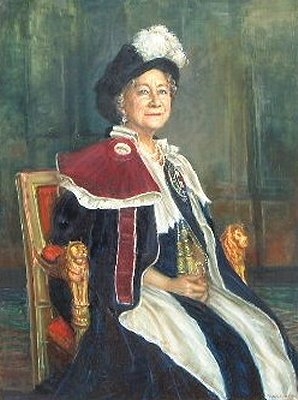 Her Majesty Queen Elizabeth The Queen Mother is the mother of Queen Elizabeth II, the present British sovereign, and the widow of the late King George VI. She was born the Honourable Elizabeth Angela Marguerite Bowes-Lyon on 4 August 1900 (daughter of Lord Glamis, later 14th Earl of Strathmore and Kinghorne) and spent her early childhood at St Paul''s Waldenbury in Hertfordshire, north of the capital. This was the country home of her parents. The Bowes-Lyon family is descended from the Royal House of Scotland. From childhood days The Queen Mother and her older sisters had been friendly with the children of King George V and Queen Mary. Occasionally members of the Royal family stayed at Glamis Castle. In 1922 Lady Elizabeth acted as one of the bridesmaids at the wedding of their daughter, Princess Mary. In January 1923 came the announcement of her engagement to HRH The Duke of York, The King and Queen''s second son. They were married on 26 April 1923 in Westminster Abbey. They had two children, Princess Elizabeth, born on 21 April 1926 at the Strathmores'' London home, 17 Bruton Street, and Princess Margaret, born on 21 August 1930 at Glamis Castle. King George V died in January 1936. When King Edward VIII abdicated on 11 December the same year, the accession of the Duke and Duchess was proclaimed and they assumed the responsibilities of the throne. Their coronation took place on 12 May 1937. With the outbreak of war in 1939, there was some suggestion that the Queen and her daughters should evacuate to North America, but throughout the Second World War the Queen and her children shared the dangers and difficulties of the rest of the nation. She was in Buckingham Palace when it was bombed in September 1940. She and the King visited badly damaged areas throughout the country after the air-raids, and toured Britain visiting hospitals, factories and troops. After the war,in 1947, they went on an extensive tour of South Africa. In 1948 the King and Queen celebrated their Silver Wedding. Broadcasting to the nation, the King spoke movingly of the inspiration that he had received from his marriage. Sadly, his health prevented him carrying out further Commonwealth tours. The last major public occasion that he and the Queen attended together was the opening of the Festival of Britain in May 1951. In autumn 1951, Princess Elizabeth and The Duke of Edinburgh took his place on a tour of Canada, and did so again the following January on a postponed visit to Australia and New Zealand. It was at the beginning of this trip that the King died peacefully at Sandringham, on 6 February 1952. Since the King''s death, The Queen Mother has continued her public duties in the UK and overseas. Her Majesty is Patron or President of some 350 organisations. She is Commandant-in--Chief of each of the Army and Air Force Women''s Services and for Women in the Royal Navy. For many years she was President of the British Red Cross Society, and she is Commandant-in-Chief of the Nursing Division of the St John Ambulance Brigade. She is also Colonel-in-Chief or Honorary Colonel of many UK and overseas regiments, and Commandan-in-Chief of the Royal Air Force Central Flying School. She has accepted honorary degrees from many universities, and was Chancellor of the University of London for 25 years until 1981. In 1978 Her Majesty was appointed Lord Warden and Admiral of the Cinque Ports and Constable of Dover Castle.