Antique Passengers on the deck of a steam packet in the Adriatic Sea | ANTIQUES.CO.UK | 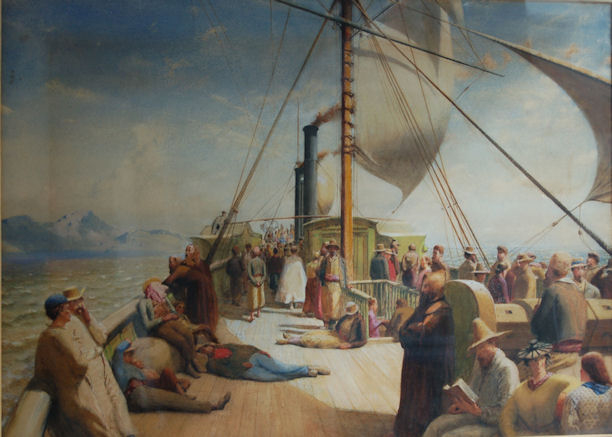 Henry Burdon Richardson was the eldest son on Thomas Miles Richardson senior, he lived in Newcastle upon Tyne and exhibited at the RI and Royal Academy. He is recorded as painting on the continent including ; Spain, Italy and Germany. This watercolour depicts the deck of a steam packet navigating the waters of the Adriatic. It is possible that Richardson sailed from Venice and was making his way down the Adriatic coast via Trieste, Split, Dubrovnick with his final destination perhaps being Greece or Turkey.

It is likely that the scene on the deck of the steam packet is on one of the many Austrian Lloyd Steam Navigation Company ships operated in the Adriatic in the mid to late 19th century. This company was started in 1837 at Trieste, where its headquarters are still situated. It commenced operations with seven small wooden paddle-boats for the voyage to Constantinople and the Levant. By 1910 they had increased to a fleet of sixty-two iron and steel steamships, with a gross tonnage of about a quarter of a million tons. The whole eastern coast of the Adriatic and the Levant is visited by them with frequent services. There is a line to the west as far as Brazil, and a monthly mail service between Trieste, Brindisi and Bombay. There is also a monthly ordinary service between Trieste, Bombay, China and Japan, and a monthly branch in connexion with it between Colombo, Madras and Calcutta.