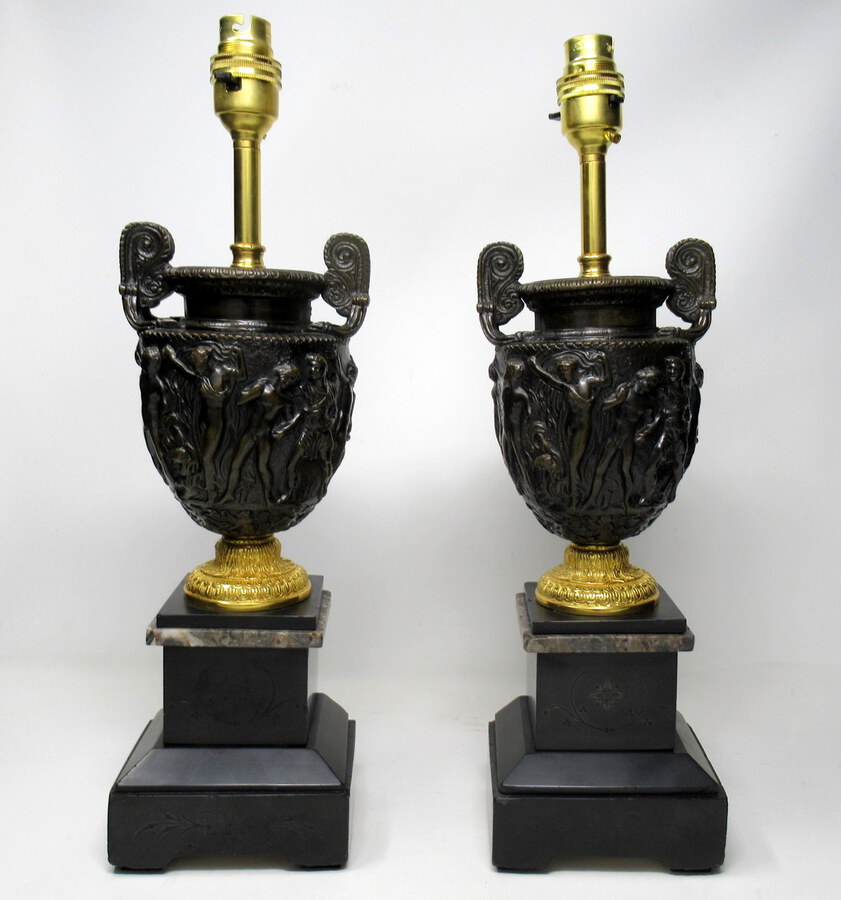 Patrick Howard Antiques has 180 antiques for sale.
click here to see them all

Condition: These lamps have been professionally re-bronze patinated and re-wired for electricity. Some very small losses to marble bases. Height: (entire as shown image one) 15.5" (39.5cm). Width: (at base) 4.25" (11cm). Depth: (at base) 3.5” (9cm). Location: Dublin City, Ireland. Worldwide Store to door shipping. NOTE: The Townley Vase is a large Roman marble vase of the second century CE, discovered in 1773 by the Scottish antiquarian and dealer in antiquities Gavin Hamilton in excavating a Roman Villa at Monte Cagnolo, between Genzano and Civitalavinia, near the ancient Lanuvium, in Lazio, southeast of Rome The ovoid vase has volute handles in the manner of a pottery Krater. It is carved with a deep frieze in bas-relief, occupying most of the body, illustrating a Bacchanalian procession. Its name comes from the English collector Charles Townley, who purchased it from Hamilton in 1774 for £250. Townley's collection, long on display in his London house in Park Street, was bought for the British Museum after his death in 1805. In the nineteenth century it was often imagined that Keates Ode on a Grecian Urn (1819) was inspired by the Townley Vase, though modern critics suggest instead that the inspiration was more generic, and may have also owed something to scenes portrayed on William Hamilton’s collection of Greek vases which entered the BM collection at around the same time. Copies of the Townley Vase were made in plaster and imitation marble throughout the nineteenth century. At the turn of the twentieth century terracotta versions were made by Manifattura di Signa in Italy. Between the World Wars, table lamps modelled after the Townley Vase identified "cultured" households. This finely cast Pair offered in Bronze are of superb quality.

Patrick Howard Antiques has 180 antiques for sale.
click here to see them all