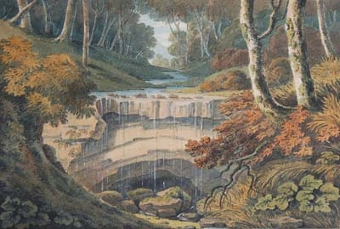 Old Roar is a deeply cut narrow valley running along the path of a stream that starts from the sandstone ridge to the North of Hastings and runs through Alexandra Park and eventually to the sea. The soft rock has enabled the stream to cut down for a considerable distance over the centuries.The name Old Roar is from one of the two waterfalls at the heart of the gill where the stream plunges over harder rock. After heavy rain the falling water makes a roaring sound. The word gill is popular in Sussex, meaning steep sided valley and can also be spelt as Ghyll.
Gills in general are a haven for wildlife and plants. The continuous tree cover creates a damp and shady microclimate and coupled with the sandstone rock allows for some remarkable rare ferns, mosses and liverworts, plus the insects and creatures that thrive among them. Old Roar Gill has a rich diversity of woodland flowering plants including bluebells, red campions, yellow archangel, lady''s smock, primroses, violets and toothwort.One of the rarer insects of Old Roar Gill breeds in the wet dead wood is a cranefly known as Lipsothrix Nervosa. This is fast becoming a rare species in Britain and can''t be found anywhere else in the world.The Gill is a perfect habitat for a variety of birds including the kingfisher, spotted flycatcher, grey wagtail and lesser spotted woodpecker. On the upper slopes of the gill is a thick covering of mature woodland, some of it still in existance from ancient forest and some that has regenerated of it''s own accord after clear-felling, plus some that have been planted.