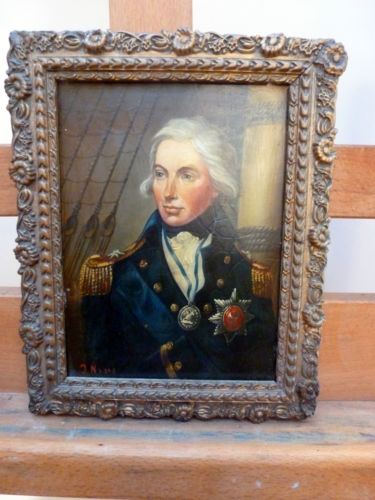 PRESENTED IN A GILT WOOD & PLASTER PERIOD FRAME. DEPICTING THE ADMIRAL OF THE BRITISH FLEET.THIS MINATURE EXAMPLE IS VERY MUCH INFLUENCED BY WORKS BT THE ARTIST LEMUEL FRANCIS ABBOTT. THERE IS AN ALMOST IDENTICAL LARGER VERSIONS HANGING IN 10 DOWNING STREET & IN THE NATIONAL GALLERY IN LONDON.THE PRESENT CONDITION OF THE PORTRAIT IS VERY GOOD & REQUIRES NO WORK AS IT HAS BEEN VERY CAREFULLY CLEANED THE THE PAST.
MAY WELL HAVE ALSO BEENPROTECTED UNDER GLASS FOR SOME YEARS. FRAME IS A 19TH CENTURY PLASTER & GILT DECORATIVE EXAMPLE,WITH JUST A TINY LOSS HERE AND THERE,BUT NOT TOO NOTICEABLE. DATE
Early 19th.Century

MEASUREMENTS TO INCLUDE THE FRAME:
HEIGHT 10 INCHES
WIDTH 8 INCHES1. Where and when was Nelson born?
2. What age was he when he first entered the navy?
3. When did he first come a national hero?
4. What other battles was he involved in?
5. Where and when did he lose the sight of his right eye?
6. Where and when did he lose his right arm?
7. When did he meet Lady Emma Hamilton?
8. What was his rank at the battle of Trafalgar?
9. How did Nelson die?
10. What happened to his body?1. Nelson was born at Burnham Thorpe in Norfolk. He was the sixth child of the Revd Edmund Nelson and his wife. He was born on Friday 29 September 1758.2. Nelson entered the Navy as a Midshipman at the age of 12. His first ship was HMS Raisonable which was commanded by his uncle, Maurice Suckling.3. He first became a national hero at the battle of Cape St Vincent on 14 February 1797 against a combined French and Spanish fleet. He was Captain of HMS Captain. The Commander in Chief was John Jervis. The British fleet were in a single line of battle to engage the enemy when some Spanish ships looked as though they might escape north when they were astern of the British column. Nelson spotted this and took his ship out of the line across the passage of the Spanish ships, forcing them to change course, and allowed the leading British ships to catch them up. Nelson also led a boarding party and captured two Spanish ships, San Josef and San Nicholas.4. The other major battles that Nelson is known for are the battle of the Nile (also known as Aboukir Bay) on 1st August 1798, the battle of Copenhagen on 2 April 1801 and the battle of Trafalgar on 21 October 1805. He was also involved in some minor engagements.5. He lost the sight in his right eye at the siege of Calvi on 10 July 1794.6. He lost his right arm at Santa Cruz (Tenerife) on 24 July 1797.7. He first met Lady Emma Hamilton at Naples in 1793 when he was Captain of HMS Agamemnon. She was the wife of Sir William Hamilton, the British Envoy to the King and Queen of Naples. He returned to Naples after the battle of the Nile in September 1798 in HMS Vanguard. He was a sick man, but Lady Hamilton's welcome was effusive and he stayed with the Hamiltons to recover his health, nursed by Lady Hamilton and her mother. During December, Nelson and Lady Hamilton worked to evacuated the King and Queen of Naples after the French invaded. They became lovers in 1800.8. At the battle of Trafalgar, Nelson was Vice Admiral of the White and Commander in Chief in the Mediterranean.9. Nelson died during the battle of Trafalgar on 21 October 1805. He was walking along the quarterdeck when he was shot by a French sniper from the mizzen mast of the Redoutable. He was taken below to the orlop deck with the other wounded men where he later died from his injuries.10. After the battle, his body was encased in a large casket called a leaguer. It was then filled with brandy as this has preservative qualities.11. Nelson was given a state funeral at St.Paul's Cathedralon on the 9th January 1806,with a funeral procession through the streets of London