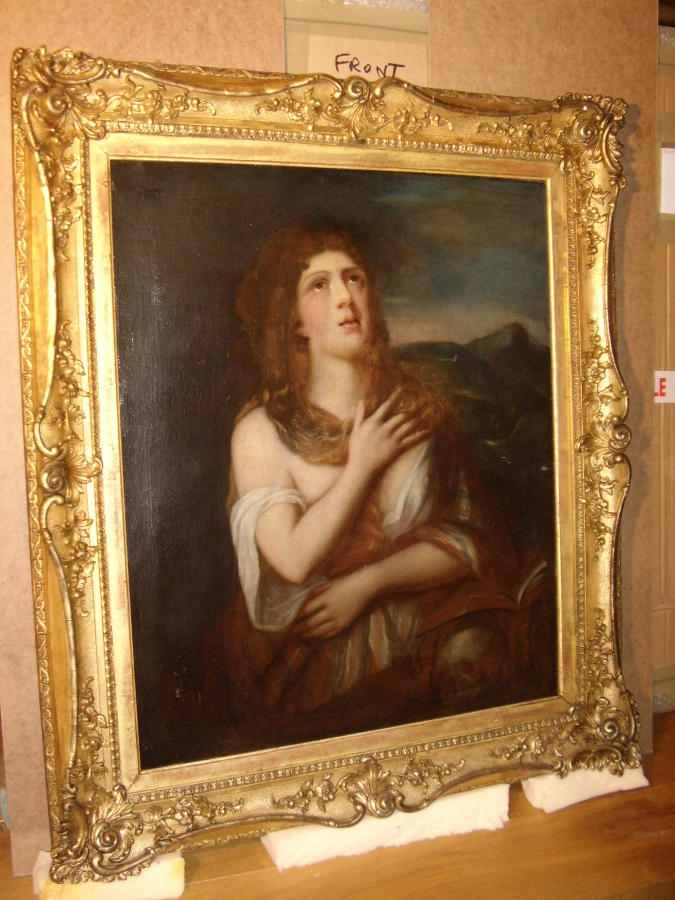 We are delighted to be able to offer an early-mid 18th century oil on canvas portrait titled "The Penitent Magdalen" after Titian's famous original painted back in 1533.

NOTE THE SKULL (See Image 13 lower right corner)Saint Mary Madalene has been painted by many artists throughout the last 300 years,with some versions having the image of a skull,seen normally at the feet of Mary or in the lower right hand corners of many examples.
In some old masters.these were later painted over.With the addition of the painted skull termed as "Momento Mori"
which is a Latin phrase translating to mean either:
"Remember your mortality", "Remember you must die" or "Remember you will die".It refers to a genre of artworks that vary widely but which all share the same purpose: to remind people of their mortality, an artistic theme dating back to antiquity.Popular belief says the phrase originated in ancient Rome: As a Roman general was parading through the streets during a victory triumph, standing behind him was his slave, tasked with reminding the general that, although at his peak today, tomorrow he could fall, or — more likely — be brought down. The servant is thought to have conveyed this with the warning, "Memento mori".HISTORY
The original Penitent Magdalene painting of saint Mary Magdalene by Titian was signed 'TITIANUS' on the vase to the left. It is now held in the Palazzo Pitti in Florence.It was commissioned by Francesco Maria I della Rovere, Duke of Urbino, who had already commissioned religious works from Titian. It has been questioned whether or not it is an original work or a copy of an earlier painting Titian produced for his patron Federico Gonzaga. Even if it is a copy, it is an autograph work entirely by Titian himself, since it is signed and was one of the Duke of Urbino's first commissions. Its use of light illuminating the subject from the left contrasts with the dark background landscape of a colourful sunset.The subject of the Magdalene as a prostitute and fallen woman returned to the path of virtue by Jesus was very popular in the 16th century, allowing artists to create erotic compositions without courting scandal. Titian's version of the subject has a slightly different dimension, however - he shows her at a moment of elation and deep repentance, with tears in her eyes (referring to her washing Jesus' feet with her tears) and her gaze raised heavenwards. Erotic though it is, Vasari states that her nudity may also refer to the sacred legend that she spent her last year naked and alone in a hermitage in the mountains near Provence, fed only by the singing angels who visited her daily. Thus her lack of clothing symbolises her abandonment of jewels, gold and worldly goods to her faith in Christ.CONDITION
Good condition commensurate with age,having been wax relined many years ago,still retaining the early wooden stretchers,althought now set in a very decorative later gesso and gilt frame.This painting is ready to hang straight on the wall.THIS EXAMPLE LOOKS STUNNING WHEN IN A ROOM WITH DIMMED LIGHTING & JUST A SPOT LIGHT FOCUSED ONTO THE FACE OF MARY(FULL OF WARMTH & CHARACTOR WITH EMOTION)FRAME
Very ornate swept frame finished with plaster cast decoration on pine framework,including a bevel slip.DATE
Early-Mid 18th Century (1720-1740)ORIGIN
European School,believed to be Italian / Venetian.MEASUREMENTS (Including Frame)
Height 38 Inches
Width 33 Inches
Depth 3 InchesTELEPHONE ENQUIRIES 07765 856171
HOURS 10 AM -10 PM 7 DAYS A WEEKDELIVERY UK MAINLAND & WORLDWIDE
QUOTES AVAILABLE ON REQUESTOUR REF 0476 * RARE EARLY EXAMPLE *