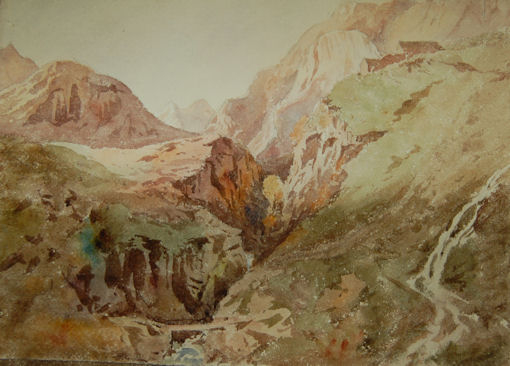 Mountain village and valley on the approach to the natural amphitheatre known as the Cirque de Gavarnie, in Hautes-Pyr?n?es d?partement, Midi-Pyr?n?es r?gion, southwestern France. Gavarnie lies in the central Pyrenees, on the French side of the Franco-Spanish frontier. The village, at an elevation of 4,452 feet (1,357 m) in the valley of the Gave (torrent) de Pau, was a resting place in medieval times for pilgrims traveling to Santiago de Compostela in northwestern Spain, which is one of the chief shrines of Christendom. The Vignemale (Occitan: Vinhamala, Aragonese: Comachibosa), at 3298 metres, is the highest of the French Pyrenean summits, in the border with Spain (the highest in the whole of the range is Pic Aneto).The Vignemale is the name given to the mountain massif which actually straddles into Spain. It consists of several distinct summits, the predominant ones being Grand Vignemale or Pique-Longue (3298m), Pointe Chausenque (3204m) and Petit Vignemale (3032m). The Vignemale is also the site of the second largest of the Pyrenean glaciers (after Aneto''s one), the Ossoue (with around 0,6 km2), across which is the "voie normale" or standard route to the summit.One of its most dramatic aspects is the North Face upon which there are a number of serious ascent routes requiring skill and commitment. Below the North Face is the impressively situated mountain refuge - the Refuge des Oulettes de Gaube. The approach from the north entails a delightful walk up to and around the picturesque Lac de Gaube giving increasingly dramatic views of the mountain. Almost synonymous with the Vignemale is the name of Count Henry Russell, an eccentric of the Victorian era who developed a life-long passion for the mountain.