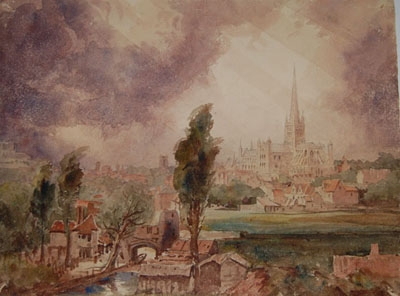 inscribed and dated on the reverse " Jun 15 - 1855"
The structure of the cathedral is primarily in the Norman style, having been constructed at the behest of Bishop Herbert de Losinga between the late 11th century and about 1145. The total length of the building is 461 feet (140 m). Significant alterations from later periods include a 315 foot (96 m) spire completed in 1465, and a two-storey cloister, the only such in England, which was built between 1300 and 1430, as well as the vaults of nave and chancel. The cathedral is built of flint and mortar faced with limestone brought in from Caen. Standing at 315 feet, the cathedral''s spire is the second tallest in England, and dominates the city skyline; only the spire of Salisbury Cathedral is higher at 404 feet. Along with Salisbury and Ely, the cathedral lacks a ring of bells - the only three English cathedrals to do so. One of the best views of the cathedral spire is from St. James''s Hill on Mousehold Heath. The bosses of the vault number over 1,000. Each is decorated with a theological image and have been described as without parallel in the Christian world. The nave vault shows the history of the world from the creation; the cloister includes series showing the life of Christ, and the Apocalypse.
The precinct of the cathedral, the limit of the former monastery, is between Tombland (the Anglo-Saxon market place) and the River Wensum - building materials were taken up the Wensum and unloaded at Pulls Ferry, Norwich. The Cathedral Close, which runs from Tombland into the cathedral grounds, contains a number of interesting buildings from the 15th through to the 19th century, including the remains of the Infirmary. The grounds also house the King Edward VI school, statues to the Duke of Wellington and Admiral Nelson and the grave of Edith Cavell. The cathedral was partially in ruins when John Cosin was there at Grammar School in the early 1600s, and the former bishop was an absentee figure. During the reign of King Charles I, an angry Puritan mob invaded the cathedral and destroyed all Catholic symbols in 1643. The building, abandoned the following year, lay in ruins for two decades. Norwich Bishop Joseph Hall provides a graphic description from his book Hard Measure:
It is tragical to relate the furious sacrilege committed under the authority of Linsey, Tofts the sheriff, and Greenwood: what clattering of glasses, what beating down of walls, what tearing down of monuments, what pulling down of seats, and wresting out of irons and brass from the windows and graves; what defacing of arms, what demolishing of curious stone-work, that had not any representation in the world but of the cost of the founder and skill of the mason; what piping on the destroyed organ-pipes; vestments, both copes and surplices, together with the leaden cross which had been newly sawed down from over the greenyard pulpit, and the singing-books and service-books, were carried to the fire in the public market-place; a lewd wretch walking before the train in his cope trailing in the dirt, with a service-book in his hand, imitating in an impious scorn the tune, and usurping the words of the litany. The ordnance being discharged on the guild-day, the cathedral was filled with musketeers, drinking and tobacconing as freely as if it had turned ale-house. Only at the Restoration in 1660 would the cathedral be restored under Charles II.