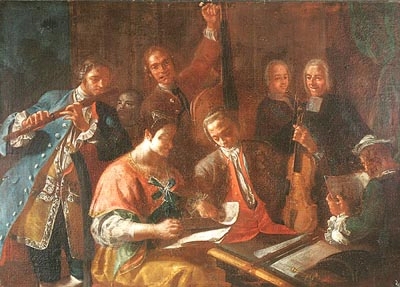 Giuseppe Bonito (Castellammare di Stabia, 11 January 1707 - Naples, 9 May 1789) was a Neapolitan painter of the Rococo period. Giuseppe Bonito is known for genre depictions on canvas. Many of Gaspare Traversi''s paintings had previously been attributed to Bonito. Like Traversi, Bonito was student of the large studio of Francesco Solimena. Bonito represented urban scenes with folklore details and figures of commedia dell''arte. Between the 1736 and 1742 Bonito it worked for the family Borboni in the royal palace of Portici. He also painted portraits including one of Maria Amalia di Sassonia, wife of the Charles VII, king of Naples. An altarpiece of the Immaculate Conception was painted in 1789 for the chapel of Royal Palace of Caserta.