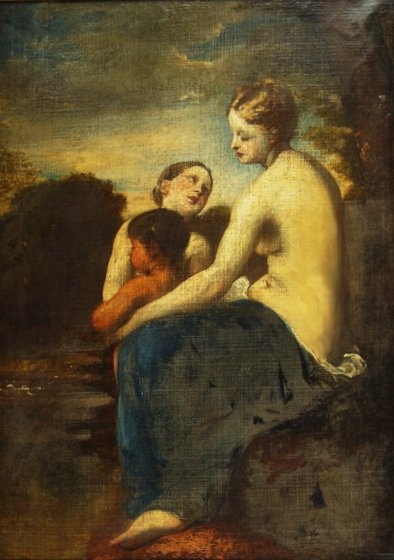 The press often accused William Etty, the first English painter to specialize in nude portraiture, of indecency. First apprenticed to a printer, he began studying painting in 1806 at the comparatively late age of nineteen. Over the following twelve years his drawings show that he worked on understanding anatomy and proportion. Between 1822 and 1824, Etty made a Grand Tour to France and Italy, where he copied works by Titian and Rubens. He made countless studies of the nude, which formed the basis of figures in large paintings illustrating scenes from history. When his patronage changed from nobles to merchants and industrialists, Etty shifted to smaller, less ambitious works. Although severely criticized by the press, he achieved a great deal of success and was honored with a one-man exhibition at the Society of Arts in London in 1849.