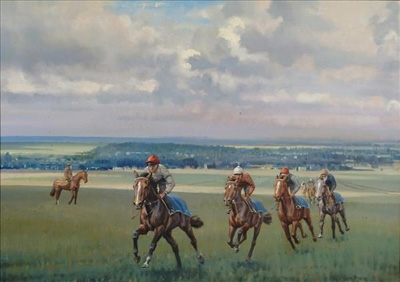 This is one of the most famous gallops at Newmarket, where horses are trained every day - usually early in the morning. The human population of Newmarket is of the order of 15,000 and it is estimated that one in four jobs are connected to horseracing in one way or another. Newmarket has 3 main sections of Heath, all of which are used to train the racehorses on. "Warren Hill" overlooks the town and consists of 3 all weather canters and a multitude of grass canters.
Born on May 28 th in Leicestershire, where his family has lived for some generations, Cawthorne?s interest in art first became apparent at the age of two and that in horses at four, but he did not begin painting seriously until in his late ?twenties. Guidance came from the artist John Kenney during the first four years; early in his career he had a series of exhibitions in Leicestershire and more recently Newmarket and America, but now rarely exhibits as his commissions keep him totally employed. He has sold many works on both sides of the Atlantic, and a number have been reproduced as prints. His oil paintings have sold at the prestigious auction houses Sotheby?s and Christies. Hunting and racing are his main interests.