midshipman and his groom in a stall 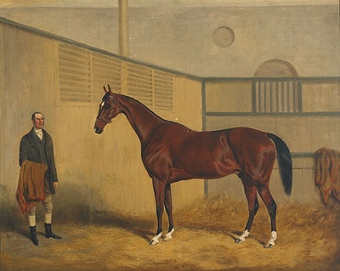 William Joseph Shayer was an animal and landscape painter, who was also the eldest son and imitator of William Shayer. William Joseph exhibited at the Royal Academy in 1858 and in 1885, at the British Institution and at Suffolk Street. His pictures are often confused with his father?s as they undoubtedly worked together and both signed their works W. Shayer.

Willaim Joseph died aged eighty-one on 5 November 1892 and was buried in the same grave as his wife and daughter and his brother Edward. There was neither a will nor letters of administration, which suggests that he left no property that was considered to be of value.A work by this artist is in the Glasgow Art Gallery.