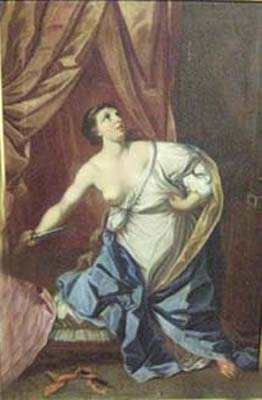 framed size 32 x 46 in.
Lucretia is a legendary figure in the history of the Roman Republic. Her husband was Lucius Tarquinius Collatinus, her father was Spurius Lucretius Tricipitinus and her brother was Publius Lucretius Tricipitinus, one of the two second Consuls of Rome. According to Roman mythology her rape and consequent suicide were the cause for the overthrow of the monarchy and the establishment of the Roman republic.
According to the version of Livy, the last king of Rome had a violent son, Sextus Tarquinius, who in 509 BC raped a Roman noblewoman named Lucretia. He told her that if she did not do what he said, then he would kill her and place her dead body naked next to the body of a slave. The perception of having committed adultery with a lowly slave would have brought serious dishonor on Lucretia''s family, so she complied. Lucretia compelled her family to take action by gathering her kinsmen, telling them what happened, and then killing herself. When her family found her, she was dead with a knife stabbing her heart. Her brother Lucius Junius Brutus incited the people of Rome against the royal family by displaying her body. They were impelled to avenge her, and Brutus led an uprising that drove the Tarquins out of Rome to take refuge in Etruria. The result was the replacement of the monarchy with the new republic. Among the avengers was also her husband Lucius Tarquinius Collatinus. In the end Lucretia''s brother and her husband became the first consuls of Rome.
St. Augustine made use of the figure of Lucretia in The City of God to defend the honour of Christian women who had been raped in the sack of Rome and had not committed suicide. The suicide of Lucretia has been an enduring subject for visual artists, including Titian, Rembrandt, D?rer, Raphael, Botticelli, J?rg Breu the Elder, Johannes Moreelse, Gentileschi, Dami? Campeny and others. The story of Lucretia was a popular moral tale in the later Middle Ages. The story has been recounted in Geoffrey Chaucer''s The Legend of Good Women, John Gower''s Confessio Amantis (Book VII), and John Lydgate''s Fall of Princes. Lucrece is also featured in William Shakespeare''s 1594 long poem The Rape of Lucrece; he also mentioned her in Titus Andronicus and As You Like It.
She is also mentioned in the poem Appius and Virginia by John Webster and Thomas Heywood, which includes the following lines:
Two ladies fair, but most unfortunate
Have in their ruins rais''d declining Rome,
Lucretia and Virginia, both renowned
For chastity Thomas Heywood''s play The Rape of Lucrece dates from 1607. The subject also enjoyed a revival in the mid twentieth century; Le Viol de Lucr?ce was a 1931 play by Andr? Obey and The Rape of Lucretia, a 1946 opera by Benjamin Britten. Ernst Krenek set Emmet Lavery''s libretto Tarquin (1940), a version in a contemporary setting. Titian''s image of the rape.Lucretia appears to Dante in the section of Limbo reserved to the nobles of Rome and other "virtuous pagans" in Canto IV of the Inferno. Christine de Pizan used Lucretia just as St. Augustine of Hippo did in her City of Ladies, defending a woman''s sanctity. In Samuel Richardson''s 1740 novel Pamela, Mr. B. cites the story of Lucretia as a reason why Pamela ought not fear for her reputation, should he rape her. Pamela quickly sets him straight with a better reading of the story. Colonial Mexican poet Sor Juana In?s de la Cruz also mentions "Lucrecia" in her poem "Redondillas", a commentary on prostitution and who is to blame.