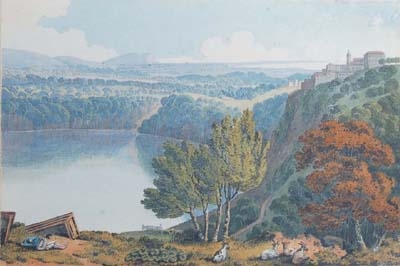 Lake Nemi (Latin: Nemorensis Lacus) is a small circular volcanic lake in the Lazio region of Italy 30 kilometers south of Rome, taking its name from Nemi, the largest town in the area, that overlooks it from a height. It has a surface of c. 1.67 km? and a maximum depth of 33 meters. The lake is most famous for its sunken Roman ships. These ships were very large and technologically advanced for their time.
Emperors Caligula and Tiberius sailed Lake Nemi not merely to cool off in summer, but to assert themselves as Nemorensi, rulers aligning with the Stars, wedded to Earth''s perpetual life-force. Lake Nemi is also a painting by George Inness. He lived as a painter in the United States and on his second trip to Italy, created the painting. The painting portrays the scene of a man in a black outfit and Lake Nemi in the background. He claimed "it was one of my very best." Muriel Spark''s 1976 novel The Takeover is set in three fictitious villas overlooking Lake Nemi. Lake Nemi is an ancient lake that is located east of Rome in the Alban Hills where the temple of Diana once stood, surrounded by her sacred grove. In ancient times the lake was known as "Diana''s Mirror" because the reflection of the moon upon Lake Nemi could be perfectly viewed from the temple. A stream flowed into Lake Nemi from a sacred grotto nearby the temple. This stream was associated with the water nymph named Egeria. Both Egeria and Diana are early forms in the Lady of the Lake mythos. The Lady of the Lake was intimately connected with the guardian of the sacred grove of Diana. He was referred to as Rex Nemorensis, the King of the Woods, whose role it was to guard Diana''s sanctuary at Nemi.