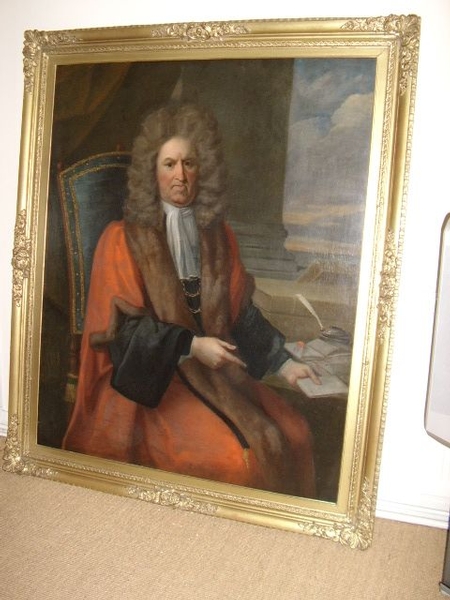 Attributed to Thomas Hill 1661 - 1734.
Initialed on the letter on the table T.H.DATE:
Approximate date is estimated to be between 1795-1710 latest.MEASUREMENTS (Inc Frame)
Height: 57 Inches
Width: 48 InchesFRAME:
A fine decorative period plaster & gilt example in good condition.CONDITION:
After careful cleaning and restoration works,
the portrait is now in very good condition for its age,having already been wax re-lined around 20 - 30 years ago.HISTORY:
Robert Dormer was the second son of John Dormer, Barister of Lee Grange & Purston, Buckingham.He was baptised at Quainton near Aylesbury on 30th May 1650.He entered Lincoln`s Inn in May 1669, called to the bar in January 1675.He later became Chancellor of Durham.He entered parliament as a member for Aylesbury in 1698.In 1701 & 1705 he was elected as M.P. for the county of Buckinghamshire.On 28th November 1702 he became M.P for Northallerton.He was raised to the bench of the common pleas on 8th January 1706.His seat was at Arle Court near Cheltenham, Gloucestershire.He inherited Lee Grange & Purston from his nephew Sir William Dormer 2nd Bt.He died on 18th September 1726 & was buried at Quainton.In the tower of Quainton Church you will find a fine monument to Sir Robert Dormer & his wife & son.TELEPHONE ENQUIRIES: 01530 411126 OR 07765 856171
HOURS 10 AM - 10 PM 7 DAYS A WEEKDELIVERY UK MAINLAND & WORLDWIDE
QUOTES AVAILABLE ON REQUESTOUR REF: 0370 * A RARE EXAMPLE *