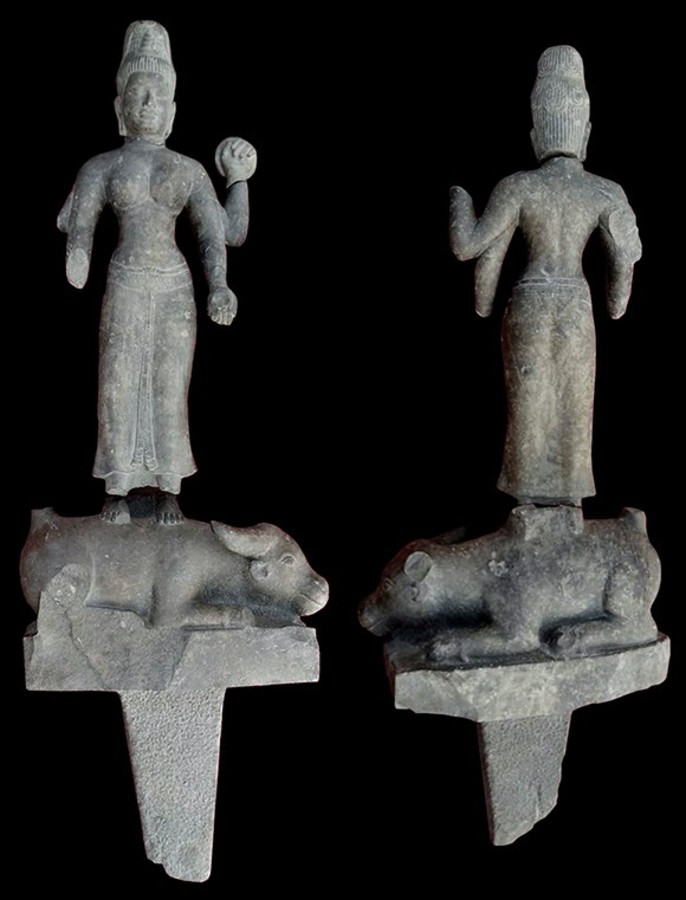 Tevoda Gallery has 9 antiques for sale.
click here to see them all

Description: This sculpture celebrates the goddess Durga's victory over the demon-buffalo Mahishasura who is represented beneath the Durga's feet, an epic told in the ancient Indian Markandeya Purana and Matsya Purana.
According to Indian mythology, Durga's body was formed by the congealed fiery energies of all the male Hindu gods who had been enraged by their defeat at the hands of Mahisha, a demon that only a woman could vanquish. "Her face was formed from Shiva, her hair from Yama, her arms from Vishnu, and so on... Shiva gave her his trident, Vishnu gave her his chakra, Vayu his bow and arrows, and so on.

THE PRE-ANGKORIAN PERIOD (2nd half of the 6th century – beginning of the 9th century)
It is generally accepted that this period begins with the fall of Fu-nan and ends, not with the founding of Angkor, which did not take place until the last years of the 9th century, but with the introduction (in the first half of the 9th century) of the rites upon which the kingship of Angkor was to be based. The oldest (Buddhist) images are no earlier than the middle of the 6th century. The somewhat later (early 7th century and period following) Brahminic monuments already exhibit some of the traditional features of Khmer architecture. There exist only a few fine examples of Pre-Angkorian art. This period marks the beginnings of the Khmer world, in which a distinct personality gradually affirms itself, while globally remaining under foreign influences. The belief in the cult of the 'god-king', do not as yet exist. Nevertheless, the art of this period lays down the basis for sculptural symbolism, and inaugurates architectural forms which will be reused and later improved upon. Pre-Angkorian statuary witnesses an Indian influence, but anatomical representation is less dramatic. Sculptors used a support arch for figurative representations with many arms. Stone sculpture is characterized by its delicacy of execution, as well as its respect for plastic and anatomical form.

Phnom Da Style (514-600)
Sculpture: Evolution of statuary from high relief to free-standing sculpture. The works display typical Indian movement of the torso, often with a support arch to provide stability.

Other antiques available from tevoda gallery

Tevoda Gallery has 9 antiques for sale.
click here to see them all