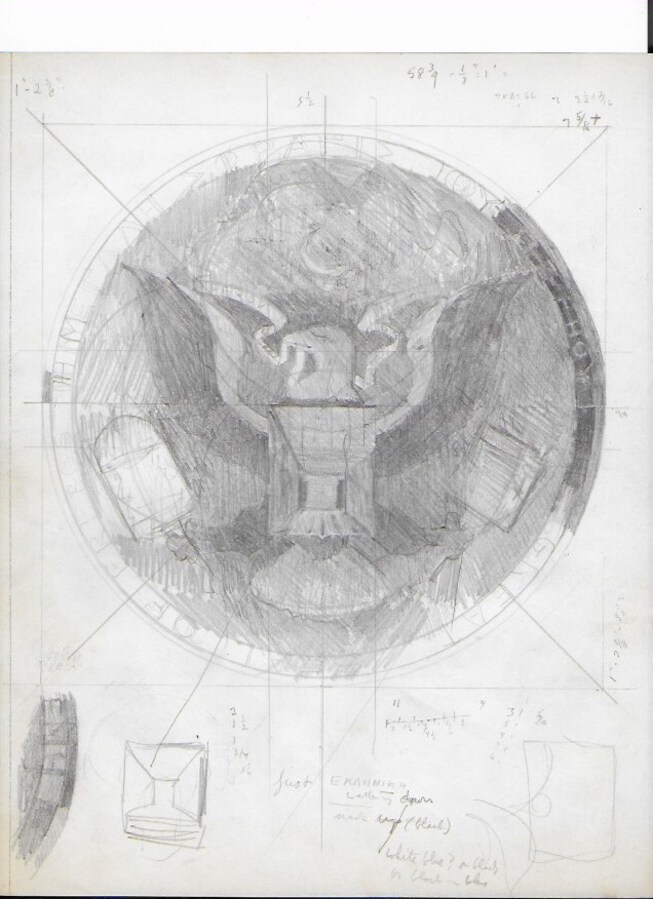 John Day American born 1932 died1982 his earliest years resonated with the localised sense of want and of the scarcity and anxiety that permeated American culture throughout the Great Depression. When pressed about his childhood, Day focused on the loving relationship that he enjoyed with his grandmother, Frances Hamblin, but the influence of his father, an anesthesiologist and his classical pianist mother manifested in a number of interesting and often unexpected ways as his oeuvre developed.Rather than open his paintings as a forum in which to process identity, Day carefully isolated respective characteristics, fomenting his most vulnerable personal presence through artistic absence. Day sold his first painting at age fifteen, and at eighteen began his studies with Josef Albers in Yale University's Department of Design. Over the next three decades, John Day tested and explored a number of different artistic practices, each a discrete permutation of the theoretical and practical variables that would allow him, ultimately, to "step out of the way", freeing each of his viewers to a reception unsettling in its forceful solitude. The carefully calculated richness of Day's paintings resides in their absences and exclusions and restraint as much as in their application of paint to canvas
https://www.youtube.com/watch?v=Z6_nWzs5Qoc&t=29s

FURTHER WORKS CLICK HEREhttps://www.antiques.co.uk/seller-items.cfm?seller=4792IAIN@ANTIQUES.CO.UK+44 7557400728
Currenty on show at Malden Library Boston USA Gallery Hours: John Day - A Glimpse of Color
Saturday, 2 October?9:00 – 10:30pm
Internationally Acclaimed Artist John Day’s Work Comes Hometo Malden
Following asuccessful solo show in Geneva, Switzerland, the work of Malden born artistJohn Day comes to the Malden Public Library’s Converse Galleries for a monthlong exhibition: John Day: A Glimpse ofColor.
John Day was born inMalden on May 27, 1932 and sold his first painting at the age of fifteen. His father was an anesthesiologist and hismother was a classical pianist and music teacher. After graduating from MaldenHigh School (class of 1949) where he had already exhibited his talent for, and commitmentto, painting, he spent a year at Syracuse University‘s School of Art, beforetransferring to Yale University’s Schoolof Art & Architecture. During his years at Yale, he studied with legendaryteacher and color theorist Josef Albers. In 1970 he became a Professor of Artat William Paterson College in New Jersey.
Over the next threedecades, Day tested and explored a number of different artistic styles, rangingfrom impressionistic landscapes, to collages, to precisely-blended colormeditations. Many of his early collageswere torn-paper landscapes that reference the work of the nouveau réalistessuch as Raymond Hains from the 1960’s. His surrealist “Erebos” seriesillustrates his interest in the art and life of Ancient Greece. The abstractpaintings from the last phase of his life evoke the spiritual intensity of MarkRothko’s work.
John Day wonrecognition with numerous awards, prizes and grants including stays at Yaddoand the McDowell Colony, an Ingram Merrill Foundation grant, numerous firstprizes at judged exhibitions. From 1961through 1984, he had an annual one-man exhibitions at galleries in New York, Connecticut,New Jersey, and Paris. He was also included in numerous group exhibitions,including those at the Whitney Museum of American Art, the Museum of ModernArt, the Brooklyn Museum in New York City; the American Embassy in London; theMusée Pompidou, the Foundation Maeght, and Marseilles’ Musée Cantini in France;the Guild Hall Museum in East Hampton, New York; the Montclair Museum in NewJersey; the Harmon Gallery in Naples, Florida. He continued his devotion to serious art untilhis death in New York City on April 15, 1982, one of the early victims of the AIDSepidemic.
His paintings are found in the collections of the HirshhornMuseum and Sculpture Garden, the Metropolitan Museum of Art, The BrooklynMuseum, the Solomon R Guggenheim Museum, the Whitney Museum of American Art, the Musée Pompidou in Paris, and incorporate collections around the world.
maldenpubliclibrary@gmail.com