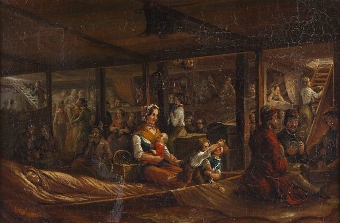 According to Pieter Van der Merwe and Amy Miller from the Royal Maritime Museum in Greenwich London, they have dated the painting to be circa 1860. The overhead clearance seems rather high and its clear that the space in the hold in which accomodation levels have been built, which we know is what happened on ships running to the NE American seaboard including Canada: they were really in the timber (pine) importing trade and emigrants so accomodated made a profitable outward cargo.

The move towards large-scale scientific farming greatly increased output but made many agricultural workers redundant. Some moved to the fast-growing industrial areas in search of work, whereas others decided to emigrate to Australia, New Zealand, Canada, South Africa and the United States. After 1830 the numbers of people leaving Britain increased dramatically. This was particularly true of those farmers and labourers who had lived in counties that had been hardest hit by the agricultural depression such as Kent, Sussex, Hampshire, Dorset, Cornwall, Yorkshire, Derbyshire, Cheshire and Cumberland.Liverpool now became the most popular emigrant port in Europe. In 1830 around 15,000 people sailed from this port to North America. By 1842 this had reached 200,000, which accounted for more than a half of all emigrants leaving from Europe.Unlike other groups of emigrants such as the Irish and Italians, a large number of the English people who went to America stayed in agriculture.The United States also attracted people from England with technological skills. Samuel Slater, who had learnt his trade under Jerediah Strutt and Richard Arkwright, pioneers of the revolution in textile machinery, arrived in the United States in 1789. Four years later Slater established America''s first cotton factory at Pawtucket, Rhode Island.Immigrants with the skills developed in the English textile industry tended to settle in mill towns in Massachusetts such as Fall River, New Bedford and Lawrence. Established by a group of capitalists in Boston in 1845, Lawrence was especially popular with the English. One visitor noted that so many of the manager, loom-fixers, wool-sorters, shopkeepers and saloon owners spoke with a Yorkshire accent that he felt he was still in England. By 1860 one-third of Lawrence''s 18,000 inhabitants were employed in the textile industry and the town had become known as the "Bradford of America". In October 1845 a serious blight began among the Irish potatoes, ruining about three-quarters of the country''s crop. This was a disaster as over four million people in Ireland depended on the potato as their chief food. The blight returned in 1846 and over the next year an estimated 350,000 people died of starvation and an outbreak of typhus that ravaged a weaken population. Despite good potato crops over the next four years, people continued to die and in 1851 the Census Commissioners estimated that nearly a million people had died during the Irish Famine. The British administration and absentee landlords were blamed for this catastrophe by the Irish people. The Irish Famine stimulated a desire to emigrate. The figures for this period show a dramatic increase in Irish people arriving in the United States: 92,484 in 1846, 196,224 in 1847, 173,744 in 1848, 204,771 in 1849, and 206,041 in 1850. By the end of 1854 nearly two million people - about a quarter of the population - had emigrated to the United States in ten years. A census carried out in 1850 revealed that there were 961,719 people in the United States that had been born in Ireland. At this time they mainly lived in New York, Pennsylvania, Massachusetts, Illinois, Ohio and New Jersey. The Irish Emigrant Society tried to persuade immigrants to move to the interior but the vast majority were poverty-stricken and had no money for transport or to buy land. They therefore tended to settle close to the port where they disembarked.The failed German revolution in 1848 stimulated emigration to America. Over the next ten years over a million people left Germany and settled in the United States. Some were the intellectual leaders of this rebellion, but most were impoverished Germans who had lost confidence in its government''s ability to solve the country''s economic problems. Others left because they feared constant political turmoil in Germany. One prosperous innkeeper wrote after arriving in Wisconsin: "I would prefer the civilized, cultured, Germany to America if it were still in its former orderly condition, but as it has turned out recently, and with the threatening prospect for the future of religion and politics, I prefer America. Here I can live a more quiet, and undisturbed life." New York City was popular with German immigrants. By 1860 over 100,000 Germans lived in the city and owned 20 churches, 50 schools, 10 bookstores and two German language daily newspapers. There was also an estimated 130,000 German-born immigrants in Chicago. The city became a centre of German culture with bands, orchestras and a theatre. Milwaukee, known as the German Athens, and Cincinnati, also had large numbers of Germans. One journalist wrote in the Houston Post, commented that "Germany seems to have lost all of her foreign possessions with the exception of Milwaukee, St. Louis and Cincinnati."