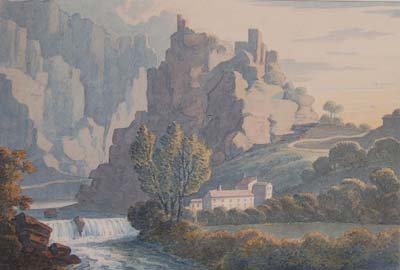 Fontaine-de-Vaucluse is a medieval village tucked in a "closed valley" at the southwestern corner of the mountainous Plateau de Vaucluse, 25 km east of Avignon. We have some complaints about the village being touristic, but it is ancient, it''s interesting, and it''s worth a visit. A key feature of Fontaine-de-Vaucluse is the truly amazing and unique sight of a river gushing up out of the ground. At the base of high, rocky cliffs, a deep pool of seemingly still water is actually a full-fledged river gushing up out of the depths. A few meters from this pool, the white water rapids crash down over black rocks, giving away the truth of the "still waters" of the source of the Sorgue river. Below the rapids, the river settles down to a wide expanse in front of dams and waterwheels, passing under the bridge at the center of the village, and then flowing on downstream as a lovely river (photo above).
The source pool is fed by collective rainfall in the Plateau de Vaucluse. If the season is dry, there won''t be much water, but at a maximum this source produces water at an amazing 200 cubic meters a second, making it one of the most powerful resurgent springs in the world! Speleologists have searched, futilely for the source of the spring. In 1878 a descent of 23 m was made into the pool. As late as 1985, a small robot submarine went down 315 m, and still no bottom. Most recently, colored dye has been used to prove that the source originates somewhere high up on the Plateau de Vaucluse, flowing 20-30 km thorough rocky underground passages before it arrives at the still-looking pool. Long before the speleologists could venture into the pool, it was made safe for them by Saint V?ran who chased away the dragon that dwelt in the fountain''s grotto. The banks of the river are lined with overhanging trees, parks, houses with lovely gardens, a few old factories and mills, and usually a scattering of fishermen. Just downstream from the village is the high, multi-arched 19th-century Aqueduct de Galas. One of the attractions in the village is a paper mill. Now a site for tourists to visit, this was a driving industrial force here from the 15th century. First record, 1034: Vallis Clausa (for "closed valley") Named Vaucluse-la-Fontaine until 1946 . Prehistoric: there are still signs of prehistoric occupation. Gallo-Roman: the old canal you can see along the left bank of the river, just below the rapids, was built by Constantine in the 4th century. Many Roman artifacts still remain, including columns. The castle ruins lurking on the rocks above the river are on the site of a 7th-century-BC oppidum; it was fortified and used during the late Roman period. Medieval: the commune belonged to the fief of the Counts of Toulouse. The village was pillaged and abandoned in the 14th century.
The fountain, or spring, of Vaucluse, situated at the feet of a steep cliff 230 metres high, is the biggest spring in France. It is also the fifth largest in the world with an annual flow of 630 million cubic metres. This village of 600 inhabitants was once called Vaucluse or the closed valley (Vallis Clausa in Latin) and it gave its name to the French department of Vaucluse. Several trails indicate human occupation in the area since the neolithic era. Its spring has been the object of a major cult since Antiquity. Following some major discoveries from two cave dives by the SSFV, two archaeological sites under the protection of the SRA PACA has allowed more than 1600 antique coins from the 1st century BC to the 5th century AD to be brought back up to the surface. The principal point of interest is the source of the Sorgue to the foot of a cliff 240 metres high: Its average flow is 22 m3 / second, the highest in France, and can attain 110 m3 after the snow melts. It wasn''t until 1985 that the mystery of its origin was partially revealed: in effect, the lowest point is at -308m depth attained by a robot belonging to the Spelunking Society of Fontaine de Vaucluse. The spring is the only exit point of a subterranean basin of 1200km2 that collects the water from Mount Ventoux, the Vaucluse mountains and from the Lure mountain.