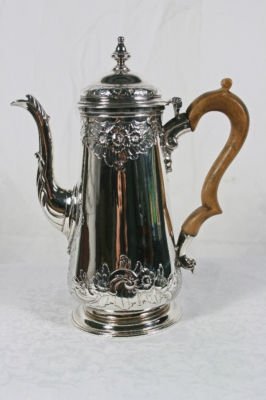 On offer here is a very fine, George II sterling silver coffee pot, hallmarked for London, 1749, maker unknown. Particularly where a piece was commissioned directly by a client, it was fairly common not to include the maker's mark and thus avoid payment of stamp duty. Of typical tapering form, later decorated with borders of flowers and foliate scrolls, and with leaf-capped spout and wooden scroll handle, this coffee pot presents in lovely condition; no damage. The pot measures 22.5 cms, 9 inches, in height, and weighs 24.5 oz. Apart from its excellent condition, the other unusual and interesting feature of this coffee pot is the inscription on the base; 'Lloyd's Coffee House, Septr. 17. 1750', and 'DW'. Lloyd's Coffee House was the birthplace of Lloyd's of London, the global society for insurance underwriting established in the late 17th century. Lloyds Coffee House served as a popular meeting place for the shipping community to negotiate insurance deals for ships and cargoes. Lloyd's Coffee House remained the home of Lloyd's of London until new premises were opened at the Royal Exchange on Cornhill, in 1774. The first Lloyds Register to publish a list of members was in 1778 where a Dunlop and Wilson are listed as members of the Society. These records are available at the Guildhall Library in London. Impossible to say of course whether the 'DW' inscribed on the coffee pot are one and the same; but the inscription of the date appears contemporary with the coffee pot; with the 'DW' possibly being added some time later. An interesting and functional piece of Georgian silver in lovely condition. More pictures can be sent on request. Inspection is available for UK based clients on appointment in Surrey.

Based in Sydney and London we offer fine quality silver, porcelain and works of art sourced from the UK and internationally. Items may be viewed before purchase in Surrey, or for those buying on the internet we offer an unequivocal return policy if items are returned in the same condition within one week of receipt. We have sold and shipped thousands of valuable items internationally and will never compromise on either the quality of our goods or shipping services. Buy from or sell to us with complete confidence.

Other antiques available from fiona bates antiques and fine arts