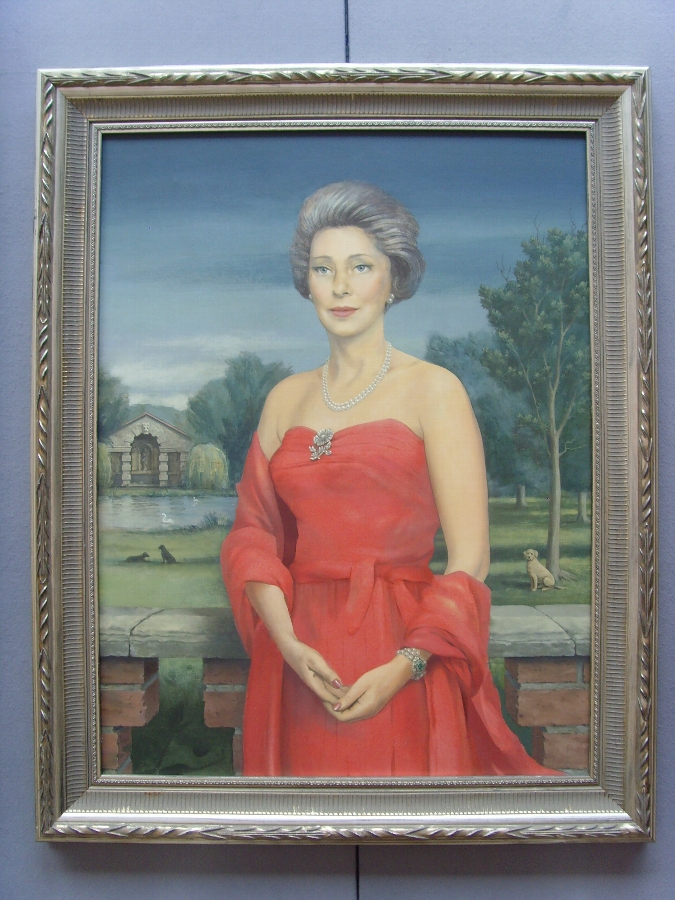 We are pleased to offer this stunningly beautiful three quarter length oil on canvas portrait of owner the of Purley Hall Berkshire Lady Frances Bradley by sought after Royal artist Timothy Whidborne.
The quality is superb with amazing detail.depth and colour.

ABOUT SITTER: LADY FRANCES BRADLEY
The painting depicts Mrs. Frances Bradley (b.1922), standing in the grounds of her home, Purley Hall, near Reading, Berkshire. Frances Bradley (nee Jenkinson) was married to Major Hugh Worgan Ogden Bradley (1920-1994) and they purchased Purley Hall in 1960, when they undertook restoration of the gardens.
The stone building to her left over the lake, is a Memorial to the Fallen at the Battle of Culloden, photo available on google.Mrs. Bradley is wearing a a strapless coral coloured evening dress, with a diamond brooch at the decolletage. She has a pearl necklace and earrings and a pearl diamond and saphire bracelet on her left wrist. There are two black and one golden labrador behind her on the lawn.ABOUT PURLEY HALL
Purley Hall is reputed to be haunted and the atmosphere was so oppressive when the Bradleys purchased the house, that they arranged an exorcism, which apparently removed the malignant spirit.HISTORY OF PURLEY HALL
(Paste & Copy Link Below)http://www.berkshirehistory.com/castles/purley_hall.htmlABOUT THE ARTIST
Timothy Charles Plunket Whidborne was born in 1927 in High Wycombe, Buckinghamshire and was educated at Stowe, where he was a fellow student of George Melly. He was a pupil of Pietro Annigoni and a member of the 'Chelsea Set' in the 1960s, where he lived and worked at The Pheasantry in King's Road, along with Eric Clapton, Germaine Greer, David Litvinoff and many other famous people.In 1968, he had four one hour sittings at Buckingham Palace for the portrait that he executed of Her Majesty the Queen, who is dressed in the uniform of Colonel-in-Chief of the Irish Guards for the Trooping of the Colour in 1966. She is mounted on the Metropolitan Police horse 'Doctor'.
This portrait can be seen on google images and was part of an exhibition of his work at the Upper Grosvenor Galleries in 1969, where this painting of Mrs. Bradley was also shown.He was also one of the artist selected to submit a head portrait of the Queen for a possible new stamp design for the Post Office.He has one painting in the National Collection, which is a painting of the Royal Hospital Chelsea, where it hangs.He has written several books in his latter years and is currently living in Deal in Kent with his wife Wendy.FRAME
The painting has been newly framed in a 3 1/2" matt silver frame and will be supplied wired and ready to hang.MEDIUM
Oil on canvas laid to panel.MEASUREMENTS (Including Frame)
Frame size 42 1/2" x 33 5/8" - 108cm x 85.4cm
Image size 35" X 26 1/2" - 88.9cm x 67.25cmCONDITION
Excellent condition. There is no craquelure or paint loss and the surface is clean. TELEPHONE ENQUIRIES 07765 856171
HOURS 10AM-10PM 7 DAYS A WEEK BY APPOINTMENT ONLYDELIVERY UK MAINLAND & WORLDWIDE / QUOTES ON REQUESTOUR REF 0573 * A STUNNINGLY BEAUTIFUL IMAGE !!