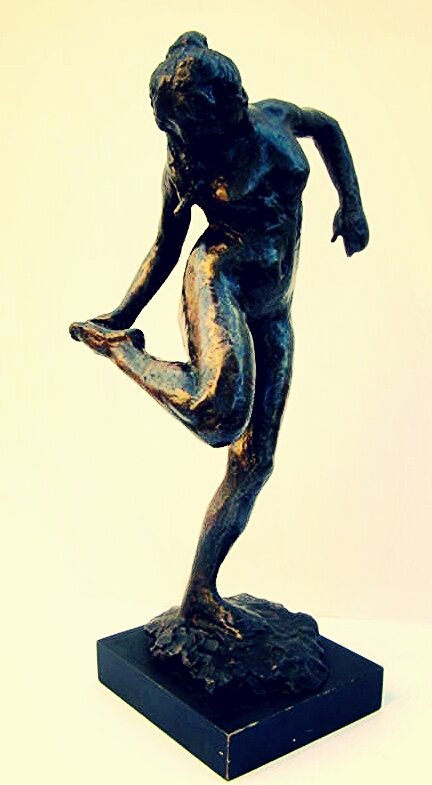 Conceived circa 1882-95 and cast in bronze in a numbered edition of 14/20.LITERATURE
Wilhem Sulser, 'Notizen zur Plastiksammlung Werner Bär' in Kunst und Volk, vol. 4, 17th year, 1955, illustrated p. 82
John Rewald, Degas, Sculpture, London, 1957, no. LXI, illustration of another cast
Sammlung Werner und Nelly Bär, Zurich, 1965, no. 66, illustrated
Daniel Catton Rich, Edgar-Hilaire-Germain Degas, New York, 1966, illustration of another cast p. 11
Franco Russoli & Fiorella Minervino, L'Opera completa di Degas, Milan, 1970, no. S34, illustration of the wax p. 142
Ian Dunlop, Degas, London, 1979, no. 196, illustration of another cast p. 211
John Rewald, Degas's Complete Sculpture, Catalogue raisonné, San Francisco, 1990, no. LXI, illustration of the wax p. 160; illustration of another cast p. 161
Anne Pingeot, Degas Sculptures, Paris, 1991, no. 33, illustrations of another cast and the present cast listed p. 169
Sara Campbell, 'Degas: The Sculpture. A Catalogue Raisonné', in Apollo, August 1995, no. 56, fig. 57, illustration of another cast and the present cast listed p. 40
Joseph S. Czestochowski & Anne Pingeot (eds.), Degas Sculptures, Catalogue Raisonné of the Bronzes, Memphis, 2002, no. 59, another cast illustrated pp. 236 & 237; the present cast listed p. 237
Werner Hofmann, Degas, A Dialogue of Difference, London, 2007, no. 208, illustration of another cast p. 262
Sara Campbell, Richard Kendall, Daphne Barbour & Shelley Sturman, Degas in the Norton Simon Museum, Pasadena, 2009, vol. II, no. 59, cat. 77, another cast illustrated pp. 395-398; the present cast listed p. 546
Suzanne Glover Lindsay, Daphne S. Barbour & Shelley G. Sturman, Edgar Degas Sculpture, Princeton, 2010, the wax illustrated p. 370This delightful bronze sculpture reflects Edgar Degas’ interest in depicting movement, a theme that saw classical ballet provide an inexhaustible source of inspiration for him. Degas' models usually performed at the Paris Opéra, and many of these young dancers came to his studio to pose for him. Toward the end of his life, Degas became more focused on the dancer than on dance itself, modelling girls in informal positions outside of the context of formal class or performances. John Rewald explains: ‘It was in his passionate search for movement that all the statuettes of dancers doing arabesques, bowing, rubbing their knees… and so on were created. All of these women were caught in poses which represent one single instant, in an arrested movement which is pregnant with the movement just completed and the one about to follow’ (J. Rewald, op. cit., 1990, p. 23). In the present work, the dancer nimbly balances on one leg and turns around in a contrapposto to examine the bottom of her right foot, highlighting her agility and natural grace, seemingly unaware of her spectator.Degas had a preference for a limited number of poses that he found particularly exciting, and he often created studies of the same pose in sketches and wax models. The pose of the dancer in the present work is clearly one that the artist especially liked as there are several known bronzes and drawings of girls in subtle variations of this position. Although supported by a bench, the dancer in the foreground of Degas’ painting Danseuses also assumes a similar pose as she adjusts her right point shoe. As described by Ann Dumas: ‘Sculpture for Degas was essentially private and experimental, an integral part of the inner creative processes that nurtured his art in all media’ (A. Dumas, 'Degas: Sculptor/Painter', in J.S. Czestochowski & A. Pingeot (eds.), op. cit., p. 47).
Degas, in fact, only publicly exhibited one sculpture during his lifetime: Petite danseuse de quatorze ans (1878–81), which was shown at the Impressionist Exhibition in Paris in 1881. His statuettes can truly be seen as three-dimensional displays of his exploration of the human form, complementing his two-dimensional studies on paper. The tactile surface quality of the present work reflects Degas’ experimentation, and Jill DeVonyar and Richard Kendall wrote that he ‘energized surfaces with knives, spatulas, finger-marks, and accidental effects’ (J. De Vonyar & R. Kendall, Degas and the Dance (exhibition catalogue), The Detroit Institute of Arts, Detroit & The Philadelphia Museum of Art, Philadelphia, 2002-03, pp. 245-246). As an insight into his creative mind and a representation of both movement and the ballet, two defining features of the artist’s œuvre, the present work is a remarkable example of Degas’ sculptures.

D.A. Antiques & Fine Art has 20 antiques for sale.
click here to see them all