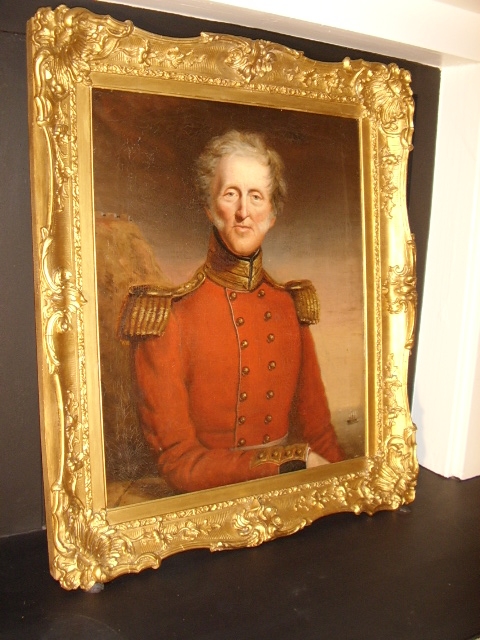 A fine oil portrait of a military Major General in the Irish Guards,(Note the Rock of Gibralter Cannon Defenses in the Left Top Corner Background)

Painted in the manner of artist Sir Thomas Lawrence (b1769-d1830),the Major General is shown wearing his bright red tunic,having distinctive high ranking gold threaded epaulettes on his shoulders and four gold buttons on his sleeve.He is depicted gazing confidently towards the artist,who has painted a dark cloudy smokey skyline with the sunset seen in the background above the ocean with vessel in sail.Epaulettes were worn on the shoulders up until 1802 after which chevrons were worn as replacements, although some high ranking officers retained them until the 1820,s.The officers face is well painted and clearly shows a confident expression and well groomed grey sideburns over his warm complexion.The portrait has been extremely well painted and has captured the true atmosphere of a serving officer who is proud and relaxed in his appearance.We consider the portrait to be of a Major or Major General in rank based on the gold shoulder epaulettes and four gold buttons on sleeveCANVAS STAMP VERSO
George Rowney & Co (publisher/printer; British;
1783 - 1800; fl. HISTORY OF THE CANVAS MAKERS:
Address
51 Rathbone Place, London(from 1820)& 190 Piccadilly & 64 Oxford Street,London No.14,Oxford Street, LondonBIOGRAPHY
Print publishers, printers, suppliers of artists' materials.Richard and Thomas Rowney began in business in London in 1783 selling perfumes and wig powder, becoming artists' colourmen at the end of the century, and later developing a lithographic printing business. The company remained in central London until 1969.UNIFORMS RANKS & REGIMENTS
Prior to 1707 colonels of regiments made their own arrangements for the manufacture of uniforms under their command. This ended when a royal warrant of 16 January 1707 established a Board of General Officers to regulate the clothing of the army. Uniforms supplied were to conform to the "sealed pattern" agreed by the board.From an early stage red coats were lined with contrasting colours and turned out to provide distinctive regimental facings (lapels, cuffs and collars). Examples were blue for the 8th Regiment of Foot, green for the 5th Regiment of Foot, yellow for the 44th Regiment of Foot and buff for the 3rd Regiment of Foot. 1747 saw the first of a series of clothing regulations and royal warrants that set out the various facing colours and distinctions to be borne by each regiment.[10] An attempt at standardisation was made following the Childers Reforms of 1881,

ABOUT THE ARTIST
Sir Thomas Lawrence PRA FRS (13 April 1769 – 7 January 1830) was a leading English portrait painter and president of the Royal Academy.Lawrence was a child prodigy. He was born in Bristol and began drawing in Devizes, where his father was an innkeeper.
At the age of ten, having moved to Bath, he was supporting his family with his pastel portraits. At eighteen he went to London and soon established his reputation as a portrait painter in oils, receiving his first royal commission, a portrait of Queen Charlotte, in 1790. He stayed at the top of his profession until his death, aged 60, in 1830. He never married. At his death, Lawrence was the most fashionable portrait painter in Europe. His reputation waned during Victorian times, but has been partially restored in more recent ones.CONDITION OF CANVAS & FRAME
The frame is an original giltwood swept example, having been recently re-gilded to creat a rich finish.
The canvas is also in good order requiring no work. As per normal,there are very slight signs of fine craquelure which is stable and consistant with age.
The portrait looks great and is ready to hang.MEASUREMENTS:
HEIGHT : 38 Inches Inc Frame
WIDTH : 33 Inches Inc Frame.DATE: Circa 1820TELEPHONE ENQUIRIES O7765 856171
HOURS 10AM - 10 PM 7 DAYS A WEEK BY APPOINTMENT ONLYDELIVERY UK MAINLAND & WORLDWIDE / QUOTES ON REQUEST
OUR REF: 0520