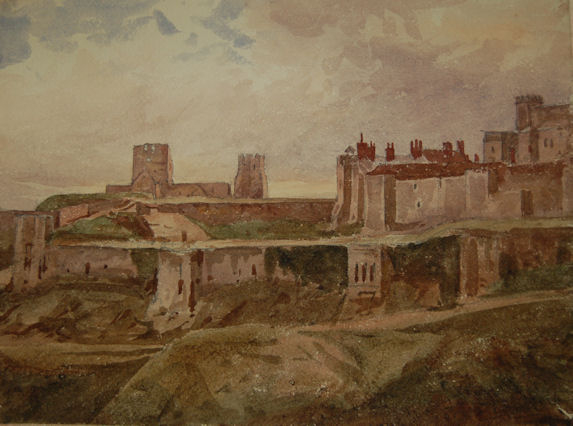 Dover Castle is a medieval castle in the town of the same name in the English county of Kent. It was founded in the 12th century and has been described as the "Key to England" due to its defensive significance throughout history. It is the largest castle in England. Originally the site may have been fortified with earthworks in the Iron Age or earlier, before the Romans invaded in AD43. This is suggested on the basis of the unusual pattern of the earthworks which does not seem to be a perfect fit for the medieval castle, although archaeological excavation at the Castle has found no evidence of prehistoric activity. The site also contained one of Dover''s two 80 foot (24 m) high Roman lighthouses (or Pharoses), one of which still survives. On the site is a classic montrol (campsite) where the Normans landed after their victorious conquest.
After the Battle of Hastings in October 1066, William the Conqueror and his forces marched to Westminster Abbey for his coronation. They took a roundabout route via Romney, Dover, Canterbury, Surrey and Berkshire. From the Cinque Ports''s foundation in 1050, Dover has always been a chief member - it may also have been this that first attracted William''s attention, and got Kent the motto of Invicta. In the words of William of Poitiers: Then he marched to Dover, which had been reported impregnable and held by a large force. The English, stricken with fear at his approach had confidence neither in their ramparts nor in the numbers of their troops ... While the inhabitants were preparing to surrender unconditionally, [the Normans], greedy for money, set the castle on fire and the great part of it was soon enveloped in flames...[William then paid for the repair and] having taken possession of the castle, the Duke spent eight days adding new fortifications to it''. The Castle was first built, entirely out of clay. It collapsed to the ground and the clay was then used as the flooring for many of the ground-floor rooms. This may have been repairs and improvements to an existing Saxon fort or burgh, centred on the Saxon church of St Mary de Castro, although archaeological evidence suggests that it was actually a new motte and bailey design castle built from scratch nearby. It was during the reign of Henry II that the castle began to take recognisable shape. The inner and outer baileys and the great Keep belong to this time. Maurice the Engineer was responsible for building the keep.[4] The keep was one of the last rectangular keeps ever built. In 1216, a group of rebel barons invited Louis VIII of France to come and take the English crown. He had some success breaching the walls but was unable ultimately to take the castle (see The First Barons'' War) The vulnerable north gate that had been breached in the siege was converted into an underground forward-defence complex (including St John''s Tower), and new gates built into the outer curtain wall on the western (Fitzwilliam''s Gate) and eastern (Constable''s Gate) sides. During the siege, the English defenders tunneled outwards and attacked the French, thus creating the only counter tunnel in the world. This can still be seen in the medieval works. By the Tudor age, the defences themselves had been superseded by gunpowder. They were improved by Henry VIII, who made a personal visit, and added to with the Moat Bulwark. During the English Civil War it was held for the king but then taken by a parliamentarian trick without a shot being fired (hence it avoided being ravaged and survives far better than most castles) in 1642.