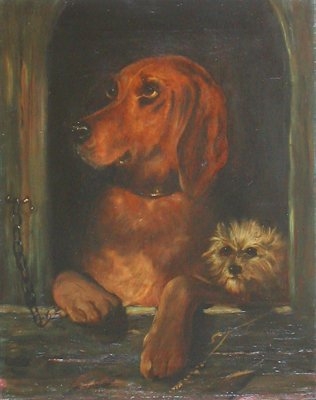 The orginal painting hangs in the Tate Gallery.

Edwin Landseer, the famous painter of animals, was born in London, the son of the engraver John Landseer ARA (1761-1852). He first exhibited works at the Royal Academy in 1815, at the precocious age of 13. He was elected ARA at the age of 24, and RA some five years later in 1831. Further honours followed - he was knighted in 1850, received a gold medal at the Paris Exhibition of 1855, and in 1866 was elected President of the Royal Academy, a position which he declined to accept.
Landseer became famous for his pictures of horses, dogs and stags, many of them later engraved by his brother Thomas Landseer. He also made a series of pictures of lions, mostly after having the opportunity to study the anatomy of a deceased specimen at Exeter Exchange in 1820, following a suggestion of Haydon. His earlier work was notable for its careful finish, but from the later 1820s, his pictures generally have a broader less detailed style. Often Landseer''s animal subjects have a sentimentality of treatment which today feels uncomfortable. As well, Landseer gave human attributes to his animals, sometimes indicated in the titles of the paintings, such as Alexander and Diogenes or Laying Down the Law. Having said all that, he remains without doubt one of the best English animal painters.
Landseer was important enough that most galleries with a representative collection of 19th Century British art will have something by him. There are several at the Tate Gallery, of which The Dying Stag is perhaps the most well-known, and a whole bunch in the Heny Cole Wingof the V & A. Also in London is Hunting in the Olden Times and other works at Kenwood House at the Wallace Collection. Wolverhampton andhas two further hunting scenes. His most familiar works are not paintings at all - the huge lions in Trafalgar Square, London.