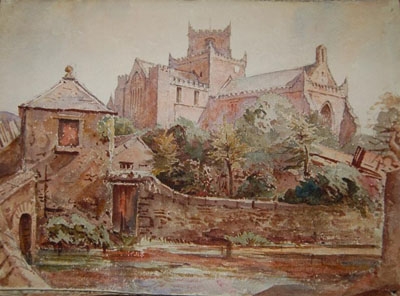 inscribed and dated on the reverse "Cartmel May 26 1868"
Cartmel Priory, at Cartmel, Cumbria, (formerly in Lancashire), is a priory founded in 1190 by William Marshal, later 1st Earl of Pembroke for the Augustinian Canons and dedicated to Saint Mary the Virgin and Saint Michael. It was first colonised by a Prior and twelve monks from Bradenstoke Priory in Wiltshire. Between 1327 and 1347 a chapel with four traceried windows was provided by Lord Harrington in the south choir aisle, and in fact his tomb is still in the building. The gatehouse, which apart from the church itself is the only surviving structure of the priory, was built between 1330 and 1340. In the 15th century extensive work was undertaken in part, due to damage (believed to be from natural causes) in the northern part of the church. In the east end of the church, the early lancet windows were replaced by one huge window of stained glass, misericords were installed in the choir, and the tower was extended. Unusually, the extension to the tower sits at a 45-degree angle on top of the base, a feature believed to be unique in England. Work continued on the building intermittently into the 16th century, when the choir screen was constructed. The 25 misericords date from 1440, and are of an exceptional quality, they also include a representation of the Green man which may follow the legend of the priory''s foundation. The priory was dissolved in 1536, and four of the monks were hanged, along with ten villagers who had supported them.
In normal circumstances, the church would have been demolished along with the rest of the buildings associated with the priory, however, the founder William Marshal had given an altar within the church to the village, and provided a priest along with it. The villagers petitioned to be allowed to keep the church as it was their only place of worship, and this was granted. However, despite the villagers'' being allowed to keep the church, the lead was stripped from the nave, and until 1618 when George Preston, a landowner at nearby Holker Hall, provided considerable finances to allow the roof to be reinstated, the villagers actually worshipped in the choir, rather than the nave of the church. In 1643 some Roundhead troops stayed in the village, stabling their horses in the church. Bullet holes from this time are still visible in the southwest door of the nave. It was used after the dissolution as a prison and later between 1624 and 1790 as a grammar school. By 1830 the church was in need of repair again, and underwent a restoration, which by some has been described as "more enthusiastic than sympathetic". In 1923 the gatehouse became a museum, and was used for exhibitions, and meetings, before being presented in 1946 to the National Trust who continue to operate it as the "Cartmel Priory Gatehouse".